Still crazy about hockey, after all these years

Hometown Hockey with host Ron MacLean begins in London, Ont., the first of 25 stops in different towns across Canada. The series launches on Sunday, Oct. 12 on CityTV. Maclean’s will run stories from various towns as the series touches down in those communities throughout the next year. 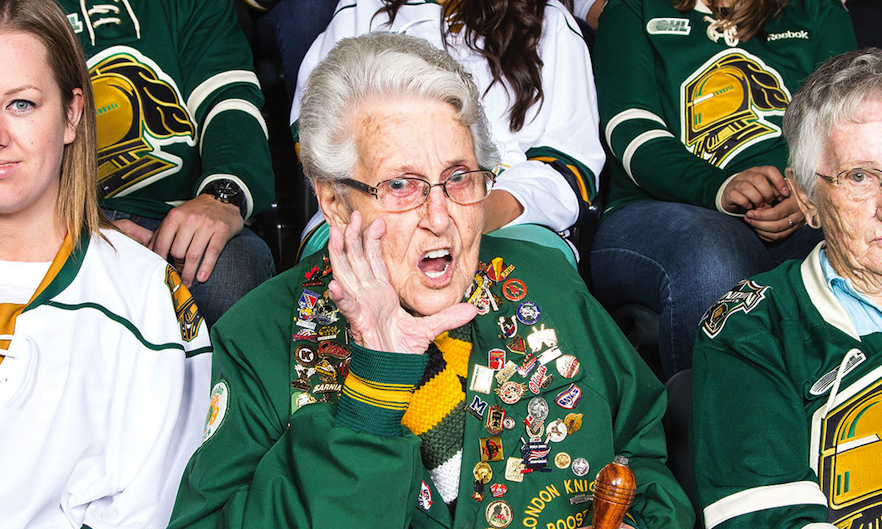 Considering what it takes to keep Mae Newton-DeBlock away from the London Knights, a little patch of black ice never had a chance. A few years ago, Newton-DeBlock was walking with her son, Alf, in downtown London toward Budweiser Gardens for a Knights game. When she took an unexpected slippery step, she lost her footing and collapsed to the ground. “People said to my son, ‘We better call an ambulance,’ ” Newton-DeBlock recalls. “I said, ‘No, you’re not. I’m going to the hockey game.’ ”

The hockey game is where the 91-year-old has been going since the Knights franchise was founded in 1965. Since then, she’s watched future NHL stars like Darryl Sittler, Brendan Shanahan and Corey Perry cut their teeth, gotten into a few verbal jousts in the opponents’ building during road games, witnessed a forlorn Knights team set a record for futility with just three wins in the 1995-96 season and celebrated when the franchise came all the way back from that devastation to win its only Memorial Cup in 2005.

“She’s a legend, not only in and around where she sits, but in the whole arena,” says Gene Chiarello, a London-based lawyer who played goal for the Knights in the late 1990s.

Go to www.hometownhockey.com to read more about Newton-DeBlock’s journey as a fan.