Rumours of Canadian men assuming an equal share of domestic chores were exaggerated, the latest numbers show. Unless you consider cooking a chore. 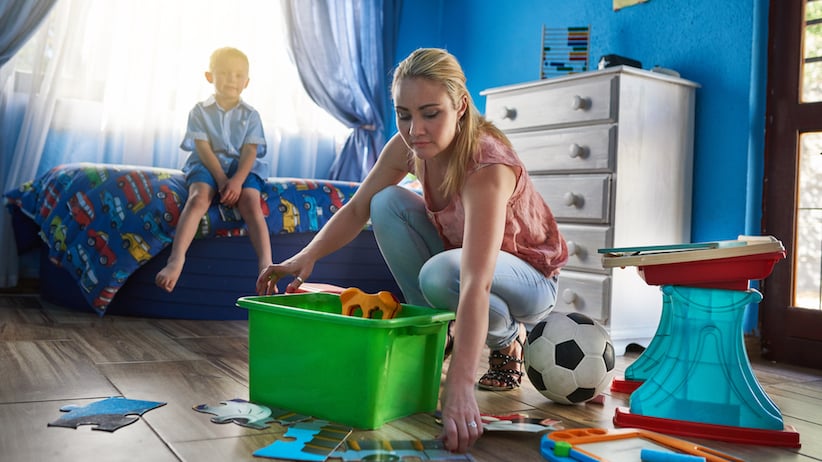 On Thursday, Statistics Canada issued one of its like-clockwork reminders that women perform far more housework and child care than their male partners. “Changes in parents’ participation in domestic tasks and care for children from 1986 to 2015” surveyed opposite-sex and same-sex couples who were married or living common-law with at least one child 17 or younger. It reveals slightly more than three-quarters (76 per cent) of men participated in some form of housework in 2015. That’s up from just over one half (51 per cent) almost three decades earlier.

Various conclusions can be drawn: one, that only 24 per cent of men are now retreating to their man cave full-time to play “Bloodborne.” Two, that women must like it this way, because otherwise why would they put up with it? Or three, that at a time when more than 77 per cent of Canadian women work outside of the home and more than one-third of them out-earn their husbands, we’re in a serious societal stall that’s manifesting itself over who cleans the toilet.

The numbers indicate we’re moving to greater equality on the home front—at a glacial pace. In 2015, men spent 2.4 hours per day on average performing household work (“on days when they did such work,” as StatsCan put it), compared with 2.0 hours in 1986—an entire 20 minutes more! According to StatsCan, that time increase is driven by men being more likely to prepare meals: some 59 per cent of fathers reported helping to make meals in 2015, up from 29 per cent in 1986. For this, in part, we can thank the Food Network and the emergence of the “hot male chef”. Men’s participation in more mundane chores—cleaning, laundry and other indoor household work—increased from 22 per cent in 1986 to only 33 per cent in 2015.

Attempts to analyze the survey are thwarted by a few things. For one, the data on marital chore division and child care was not provided. Nor was family income data; this is an important determinant in household participation, as StatsCan studies dating back more than a decade show. A 2003 survey, for example, indicated that the partner that earned the most money determined who cleaned the house: when the man is the primary earner, the female partner is more likely to clean. When the woman is the primary breadwinner, the man didn’t clean; a “cleaning lady” (again, a woman) was brought in.

Stats presented on men’s involvement in child care seem to exist at a disconnect from a culture in which fathers increasingly are primary caregivers and speak publicly about the joys of parenting (even though few Canadian fathers take time off for paternity leave). The survey found that nearly 49 per cent of fathers provided help and care to their children in 2015, up from 33 per cent in 1986. That figure didn’t change for mothers: 66 per cent of mothers did so in 2015, the same proportion as in 1986. Mothers spent more time than fathers on parental responsibilities for children in 2015—nearly two-thirds (65 per cent) of the total hours spent helping and caring for children.

Men become more involved as children get older. In 2015, fathers of young children four or younger were somewhat less likely (73 per cent) to perform household work than fathers of children aged 13 and over (81 per cent). The participation rate of mothers in household work remained higher than that of fathers, regardless of the children’s age.

RELATED: Inside the Daddy Wars

There’s another way of looking at a seeming stall on the domestic front: that the culture, and women, buy into the notion of a “domestic power premium” that dates to the 19th century. The Victorians held that women reigned in the private sphere—home, children, plants. Men’s power was seen to be rightly exercised in public—running countries and industry. (That public-private divide still shows up in household chores, with men more likely to tend to the outdoors; that said, the StatsCan survey indicated women are doing more outdoor work—up from 14 per cent in 1986 to 20 per cent in 2015.)

The fact that women and wives exited the home in record numbers in the ‘70s wasn’t met with a needed recalibration on the home front to bridge the gap created by the loss of a working wife and mother. The idea that women juggled “two jobs” or a “second shift“—home and work—became entrenched. The arrival of “domestic chic”—Martha Stewart perfectionism, trendy “laundry rooms”, lavender-scented water for ironing—didn’t help.

But here’s the thing: if men are partner-able and father-material, they’re likely capable of scrubbing the kitchen floor. But the old male bread-winner/female home-maker model is tangled with entrenched notions of what constitutes masculinity and femininity, or being a man and a woman, and calcified gender norms. In such a universe, “real men” don’t do windows—or at least don’t admit to it publicly. This sensibility was evident in an October 2016 Atlantic story: “Emasculated Men Refuse to Do Chores—Except for Cooking.” Men watching their earnings power decline were rebelling, the subhead claimed: “When their manhood is threatened, men react by doing less housework. The only exception? Meal preparation.”

There’s also the persistent belief that women are more innately suited to be the “emotional caretakers”—they’re the ones who remember dentist appointments and pick up the gifts for kids to take to birthday parties. This is reinforced by the belief men can’t perform these tasks to an acceptable standard—that a structural engineer couldn’t separate colours from whites, or that a surgeon couldn’t properly change a diaper. But there’s also a hidden, undiscussed reward in in the “domestic power premium”—remaining the hero and the keeper of the home.

RELATED: The formula for who should do the dishes

Any woman who’s looking for a partner who might be more involved in household tasks can find a few clues in this week’s release. For one, education level made a slight difference in how much men did around the house: 81 per cent of fathers with a postsecondary diploma or certificate spent some time doing domestic tasks in 2015; the rate for fathers with a high-school diploma or less was 71 per cent. Having a university degree didn’t make much of a difference: only 73 per cent of men with one performed work in the home. Education level made no difference in mothers’ participation.

Where you live also changes the odds. Men in Quebec reported being most engaged: less than half (41 percent) did at least one task—cleaning, laundry or other—on a daily basis in 2015. Still, that’s much higher than rates in Prairie provinces (data from Manitoba, Saskatchewan and Alberta were lumped together): only 25 per cent of fathers reported the same. Why participation in Quebec is so much higher is ripe for discussion. The province is the only one that legally mandates that a woman must keep her birth name after marriage. Since 1997, Quebec has been the only province to offer universal, government-subsidized daycare for children aged four and under. The program has come under a barrage of criticism but is also seen as essential in allowing women to pursue careers, boost the birth rate, ease family stress, reduce poverty and improve success in education.

In compiling this data, StatsCan missed an important opportunity to gauge differences in domestic participation between opposite-sex and same-sex couples; those findings were not broken out. A growing body of research, including a 2015 study out of the Family and Work Institute in the U.S., indicates same-sex couples are far more likely to share domestic tasks equally, and also tend to assign tasks on personal preference than gender stereotypes.

Reaching a balance that works for both partners is crucial. In 1870, Ralph Waldo Emerson wrote “Domestic Life,” a chapter in Society and Solitude, in which he identified the home as the necessary, civilized bridge between the personal and the public. Today’s StatsCan study, as frustratingly incomplete as it may be, suggests that in this country that bridge remains in need of repair—while making clear who’s most likely to rush to fix it.