He survived an explosion that left him badly burned. After a painful recovery, he finally married the love of his life. 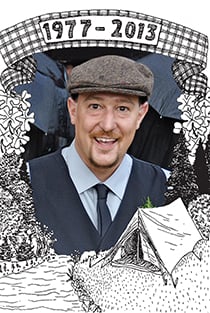 Sydney Herbert Neville was born in Burns Lake, B.C., on Aug. 16, 1977. His parents, Herb and Nettie, owned a farm, and he and his three older sisters spent their days chasing cows and riding their bikes. When he was nine, Sydney joined the agricultural youth group 4-H, and enjoyed the responsibility of raising steers.

As a child, he also loved to fish and camp; he dreamed of becoming a conservation officer, says his sister Tracey. He would often fish in François Lake, located about 30 km south of Burns Lake, with his grandparents.

In high school, the once-average-sized boy sprouted, growing to six foot two. “He was a big, goofy farm boy,” recalls his friend Dan Stevens. Always active and upbeat, he took up snowboarding and skateboarding, which resulted in a broken wrist.

After graduating, Sydney moved to Nanaimo on Vancouver Island and took some geology and general arts courses at Malaspina University-College (now Vancouver Island University). He worked odd jobs, including building fences and working as a cashier. Sydney had a tight-knit group of friends, including Jessie Bell, who brought him over to his house and introduced him to his younger sister, Marley. Sydney was instantly attracted to her. Polite and traditional, he waited to get permission from her brother before asking Marley out. “He said ‘no’ first because I was his little sister,” says Marley. “But he told Sid that if anyone was going to be with his sister, it would be him.” Winning Jessie’s permission wasn’t the only challenge. Marley was hesitant to date, and it took a few years before she agreed. Soon, the couple was inseparable.

Sydney had an easy way with people and was always quick to offer visitors to Nanaimo a place to stay. His roommates would often wake up to find eight other guys sleeping on the floor. “He always had a really deep moral compass,” says Stevens. “He knew what was right.” In 2006, Sydney took Marley’s other brother, Brandon, out for his birthday. Later that night, Brandon was out alone and was mugged. When Sydney found out, he jumped in his car and started a futile search for the attackers. “He was very protective of people he loved,” says Marley.

In 2008, Sydney and Marley had their first child, a son named Eli. “He called me when Marley was pregnant, and he was just so proud he was going to be a daddy,” says Tracey. After having their second child, Makenna, two years later, they decided to move back to Burns Lake so Sydney could take a job at the local sawmill. They talked about getting married.

On Jan. 20, 2012, those plans were shattered by an explosion at the mill. Forty-five per cent of Sydney’s torso was covered in third-degree burns. His face and hands were badly scorched, and he had torn a ligament in his knee. He remained in the hospital for three agonizing weeks and had skin-graft surgery that April. It was a long and painful recovery, but his friends and family never saw him get angry. The only time he got upset was when he thought about how his children were affected. “He just wanted to be a better dad and play with his kids without being in any pain,” says Tracey.

Sydney tried to remain as involved as he could. He would let Makenna paint his fingernails and would take Eli fishing and sing to both of them. He even took up snowmobiling, much to Marley’s chagrin. “I would try to tell him he just needs to rest and get better, but he didn’t like to sit still.”

Last month, Sydney and Marley finally got married in Coombs, B.C., outside Nanaimo. Eli was the ring-bearer. “There was this six-foot-two-inch-tall guy, and he is up there saying his vows and he is crying because he means every single word,” says Stevens, who was his best man. To everyone’s surprise, Sydney sang Marley a Dropkick Murphys song called Forever at the reception. “He used to tell me that having a wedding isn’t important. What is important to him is standing up in front of his friends and his family and telling them how much he loves me,” says Marley.

On June 7, Sydney and his 21-year-old nephew went fishing on François Lake, where he used to go out with his grandparents. It was his first time fishing since the ice had melted. Still not cleared to work, he was excited for an excuse to get back outdoors. While out, a storm hit and a wave capsized their boat. Sydney managed to save his nephew by pushing him up on top of the overturned boat before he slipped into the frigid water. His body has yet to be found. He was 36 years old.