Talk to the GoPro, creepo

How to lose faith in people, and other life lessons from Stephen Harper’s team 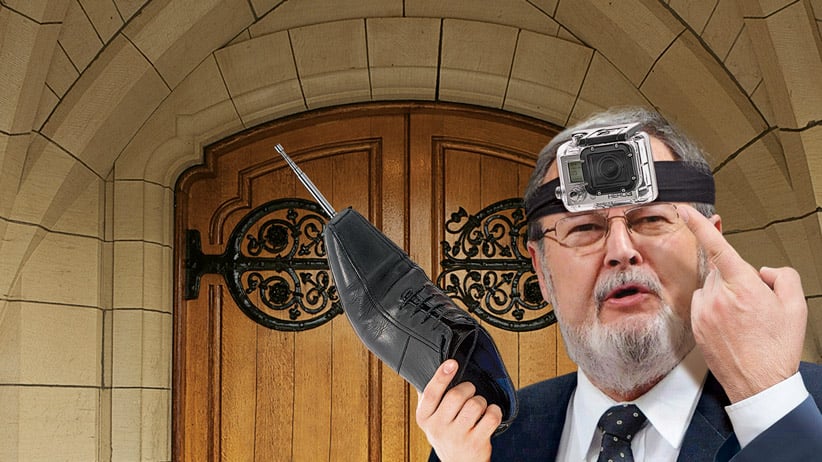 Everything our kids need to know about life, they learned during 2014 from members of the Conservative government.

Trust no one . . . no one. Some people talk about confronting harassment on Parliament Hill—but Peter Goldring is a man of action (and mystery). The Conservative MP issued a helpful roadmap on how to “consort with others.” Goldring Pro Tip No. 1: Strap on “body-worn video equipment” and record the interaction, so as to “prevent besmirchment.”

That’s right, Canada: Peter Goldring knows if you’ve been bad or good. And take it from Santa Pete, kids: It’s important to grow up thinking the worst of your adversaries, rivals, colleagues, friends, relatives and baristas. Just begin each day with the mindset that every single other human is out to sully the pristine reputation you have nurtured as a completely normal individual who walks around with a GoPro strapped to your head, shouting at strangers: “Could you please repeat that into my shoe phone?”

Be generous with your compliments . . . especially toward yourself. During a speech to party faithful, Stephen Harper declared: “The best country and the best government in the world is right here, Canada.” Got that, rest of Earth? BESTEST. GOVERNMENT. EVER. I didn’t see the speech in person, but it must have been quite a moment—the Prime Minister simultaneously displaying the braggadocio of a rapper and the hairstyle of someone who doesn’t know what a “rapper” is. (It’s not the hairdo’s fault—it never left 1973.)

Still, you have to appreciate the way Harper lured us in by making his boast sound, at first, like mundane political boilerplate. It’s the same strategy I assume Apple is using when it prompts me to approve new terms and conditions for iTunes. The best country in the world . . . blah, blah, blah . . . fine, whatever, I agree. And then you wake up the next morning going: “Hang on, did that thing also say ‘best government in the world??’ ” But by then, it’s too late. YOU CLICKED, CANADA.

Kids, this is a super-important lesson from the PM. It is not enough to love your country. You must also love the person in charge of your country, especially if that person is you. Pay yourself a compliment or two. Boast in public of being the greatest. Think of it as the oratorical equivalent of a selfie—a mouthie!

Always tell the truth . . . unless the truth is bad, then don’t. Here’s a good example: The Conservatives recently announced a $200-million fund to improve mental health care for veterans. They initially suggested the money would be allocated over six years. Turns out, it’s going to be spent over 50 years. To put that in political parlance: whoopsie.

But hang on. Across the span of time, the difference between six and 50 years is but a flick of an eyelash, right? Heck, if Harper can scrounge up some infrastructure money to build one of them four-dimensional tesseracts from Interstellar, then, boom, problemo solved. The promise to our veterans will always be being made and always be being fulfilled, for all eternity.

Using this logic, you didn’t fail to do your homework, kids. Just tell your teacher it will always be being completed.

Face the hard questions head on . . . by pretending they don’t exist. The scene: question period. The topic: the government’s military deployment to Iraq. Paul Calandra rises to his feet, reflects on this moment of consequence—and says a bunch of weird stuff on an entirely different topic. It’s like the old strategy goes: When they zig, you play chess.

Sure, dodging those questions made the Conservative MP look like a bit of a tool. But one grown man’s affront to the spirit of democracy is a desperate teenager’s hope for salvation. When you’re in a tight spot, kids, try doing the Calandra:

—It’s 2 o’clock in the morning; why did you miss your curfew?

Mother, there is confusion in this house with respect to your position on the various luncheon meats. Can you confirm rumours that you once assailed the deliciousness of salami?

—What are you talking about? I asked you why you’re home so late.

I know I speak for my siblings and for teenagers from coast to coast when I say: pimento loaf tastes like butt, Mom.

—You are SO grounded.

Fine, so that didn’t work. But there’s still time for a low-budget online attack ad accusing your parents of being “in over their heads.”