Even as a small child, he was always happy to pitch in. Keen to pay off his student loans, he worked day and night. 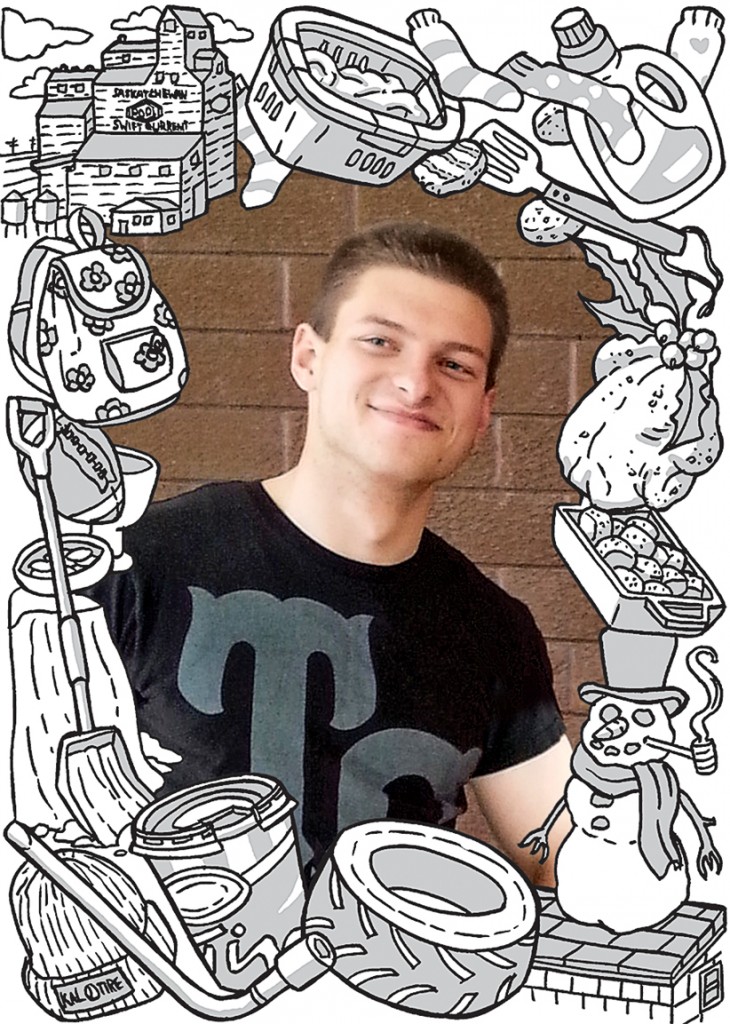 Tanner Alexander Pius Graf Bjornson was born on May 20, 1993, in Swift Current, Sask., to Kelly, a tire repairman, and Tracy, a part-time saleswoman. Tanner was the second-eldest of five siblings and, once his father moved out, Tanner was outnumbered five to one. When his fourth sister was born, he wasn’t disappointed she was a girl, but rather carried her around with glee.

Tanner always worked tirelessly. He cooked dinners and sorted laundry, mastering the barbecue and matching each pair of socks. While Tracy worked a shift one Christmas Eve, Tanner, age 12, prepared the entire turkey, stuffing and potatoes without instruction. When running errands with the family, Tanner held his sisters’ hands through parking lots and lugged their backpacks through malls. At church, he was an altar server from the age of seven—and one who was known to wink at parishioners.

Nicknamed “Tan Tan the Graf Man,” Tanner was a goofball as much as he was a worker. In a middle school performance of Scooby-Doo, he played Shaggy, having grown his hair all year long to look the part. “He was Shaggy,” says Tracy. “I swear it was the real deal.” He also played soccer and football—sometimes in the house, breaking “many a light shade,” she recalls. While Tracy drove the family to sports games in a minivan known as the “Grafmobile,” Tanner conducted his sisters in four-part harmonies of songs including Bohemian Rhapsody. Once, while shovelling the walkway and roof, he built a six-foot snowman atop his family’s bungalow. “People would stop and say, ‘Yup, Tanner’s home,’ ” says Brooklyn, his 19-year-old sister.

In Grade 9, Tanner spent a day with his father at Kal Tire, the tire shop where he worked. After that, Tanner visited frequently, picking up phrases from Kelly’s boss to greet customers who came in for a tire change. “Do you want round ones or square ones?” Tanner would ask. After high school, Tanner studied business at Lakeland College in the nearby town of Lloydminster. Two-and-a-half years later, after a brief job servicing vending machines and living out of his truck at times to pay off his student debt, Tanner landed a job as a tire mechanic at the Lloydminster branch of Kal Tire. He trekked across town for an hour each day to get to and from work, wearing a Kal Tire toque in the winters, with coveralls and gargantuan green rubber boots. When it was 30 below, he picked up a cup of black coffee to keep him warm on the way.

Eleven hours a day and four or five hours a night, Tanner worked to repair or replace tires, nearly 500 per month. He helped truck drivers remove antlers from their wheels; he got calls from tractor drivers who had driven over screwdrivers, and he served customers who came to the shop with golf tees and scissors and, in one case, a bullet, in their tires. Tanner brought in more dollars than anyone else in the shop, and he would tease his father about out-working him. “He was pretty much our best guy,” says Adam Mountney, the branch manager.

Tanner’s family got the benefit of his handiwork. When he visited Swift Current, he aired up the tires for Tracy and his sisters who owned cars. His sisters remember his hands, permanently callused and scarred. “There was dirt in the cracks of his ﬁngernails,” says Nicole, his eldest sister. “It was worked in so much, he couldn’t scrub them any cleaner.” Tanner met his girlfriend, Katelyn Smiley, in Lloydminster back in college. In late 2014, she became pregnant and, when their daughter, Sadie, was born, he brought her and Katelyn to meet his friends at Kal Tire. “He stopped the shop,” says Mountney. “He was so proud.” In late July, after working up to 100 hours per week, Tanner ﬁnally paid off his debt. “He was jumping up and down,” says Mountney. “He was saying he could finally start saving for his family.”

Aug. 7 was, of course, a workday for Tanner. At lunch, he drove home to see Sadie and to bring Katelyn an Iced Capp, her favourite drink. But the two weren’t home, so he left the drink on the table and went back to work. At about seven that evening, Tanner took a service call to fix a car on the highway. While he was setting up for the job on the shoulder of the road, a semi-truck struck and killed him. The driver has not been charged. Tanner was 22, and his daughter wasn’t yet five months old.