A ‘free soul,’ she loved family, camping and tooling around B.C. in her Jeep. She brought smiles to patients in Vancouver’s Downtown Eastside. 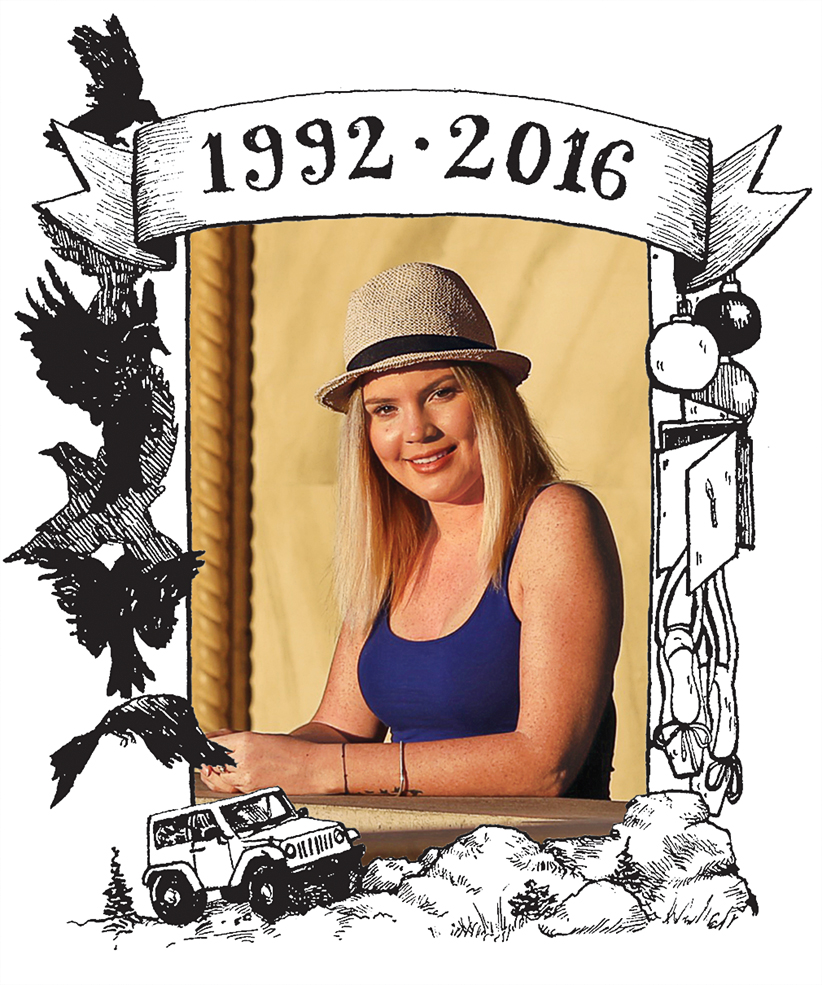 Taylor Anne Jessop was born in Burnaby, B.C., on Aug. 4, 1992, to Carolyn, an administrator at an insurance company, and Pete, a warehouse worker for Loomis Express. The couple, both single parents at the time, met at a baseball game in 1988 and realized they both had nine-month-old babies—Carolyn’s Amanda and Pete’s son Christopher—who were born just a few weeks apart. Marrying in 1991, Pete and Carolyn had Taylor, then Matthew 13 months later.

Taylor “was upside down until the day she was born,” says Carolyn. Then, at the last minute, “she flipped” and was born normally.

Growing up in Port Coquitlam, Taylor was a timid child: More watcher than doer, she preferred to stay in her stroller rather than join other kids playing in the park. She doted on Matthew though, sometimes dressing him like a girl.

Early on, Taylor showed a soft spot for those in need. When she attended Westwood Elementary School, says Carolyn, “She’d always go toward the special needs child in the class. She liked to help them, bring them home, nurture them.”

Long-legged and tall, Taylor took ballet and jazz dance from grades 6 through 8. “She enjoyed performing in recitals,” says Carolyn, “but made herself sick with stage fright.” She’d get headaches, throw up, then perform beautifully.

The blended family was close-knit. The kids never fought and there were numerous camping trips all over B.C. The Jessops had an 5½-m motor boat and the kids would go tubing, water skiing and swimming. Taylor—who later sported a tattoo of five blackbirds representing each of her family members—loved the water and was the family’s best swimmer.

She was also the most sentimental kid in the family, says Peter. She “always wrote the nicest things on a card on anyone’s birthday, Father’s Day or other occasion.”

“She was just a wonderful human being and we would have so much fun as a mother-daughter team together,” adds Carolyn. They sometimes did pedicures together. On Taylor’s 19th birthday, her mom chauffered her to four different bars to celebrate.

By the time she graduated from Pinetree Secondary in Coquitlam in 2009, the once-shy little girl had grown into a feisty young woman with a boisterous laugh—an ardent country music fan who dreamt of world travel and yearned for a career helping people.

An adventurous tomboy, Taylor “knew how to stand her ground,” says Brooke Komar, a close friend. When Brooke, 19, had her daughter Payton, Taylor became a de facto “auntie,” babysitting her, buying her a life jacket and teaching her to swim. “I even came home from work once,” recounts Brooke, “and Taylor said to me, ‘Guess what? Payton is now potty trained.’ ”

Soon after high school, Taylor took a medical office assistant course and got an offer to work the reception desk at the Downtown Community Health Centre in Vancouver’s notorious Downtown Eastside. It was more than just a reception job, says Cherrel Reid, who supervised Taylor and became a close friend. “You really have to be a special person to work there because it is such a stressful place.” With 6,000 patients in one of the most impoverished neighborhoods in Canada, clinic staff often deal with angry drug addicts demanding methadone and drunken patients who sometimes spit at staff. Though she seemed a babe in the woods at first, Taylor quickly adjusted and did her job with a smile on her face throughout. The workload was immense—Taylor was a great multi-tasker—and, says Reid, “an old soul” who was compassionate with patients.

Off work, Taylor took the 2013 white Jeep Wrangler she bought new and drove to campgrounds all over the province. She had the Jeep mounted with big gnarly tires for off-roading. “That Jeep,” says Brooke, “was her life. [We] took it out to Stave Lake for the first time and we got stuck,” she laughs, adding Payton was along for the ride.

On Aug. 5, a day after her birthday and returning from her first trip to the Calgary Stampede, Taylor camped at Haynes Point Provincial Park on Osoyoos Lake, her family’s favourite spot. She and her boyfriend were travelling side-by-side along the lake on rented personal watercraft. Suddenly approaching a large boat wake, Taylor apparently veered to avoid it, colliding with her boyfriend’s machine. She was pulled unconscious from the water by a boater and soon after pronounced dead at the scene. She was 24.