She was an avid hockey player and animal lover. As often as possible she’d drive home to be close to family on their farm. 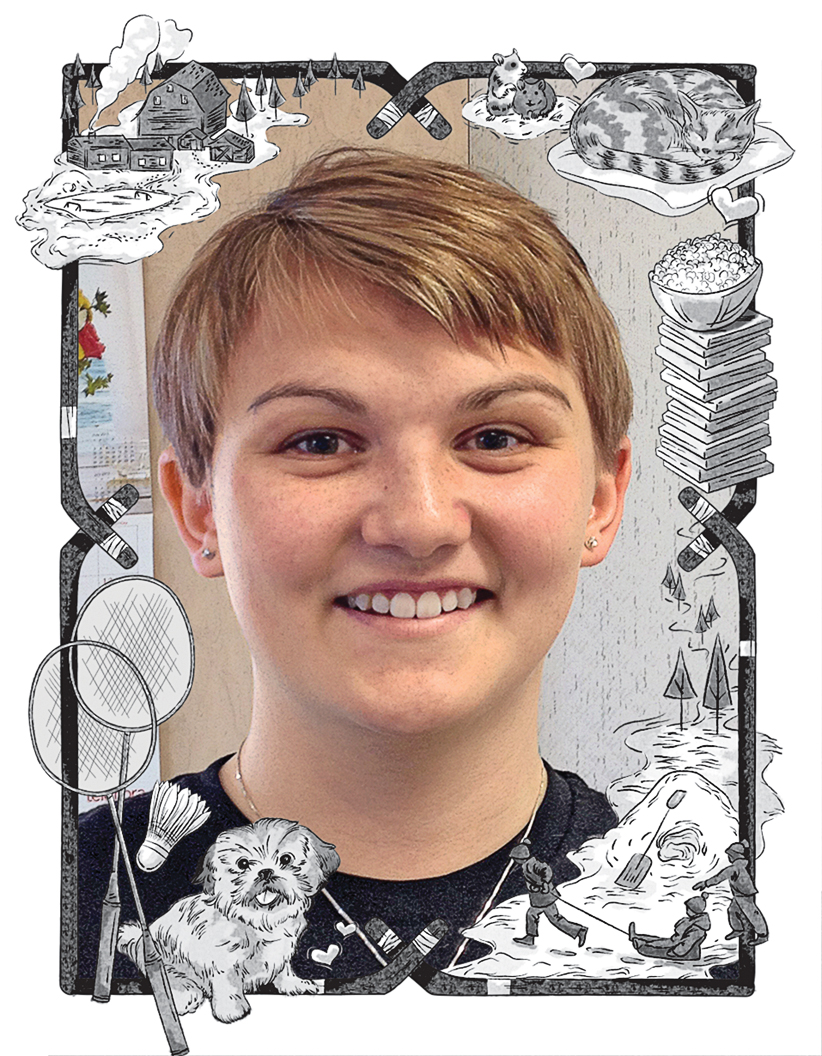 Taylor Dawn Renwick was born in Deloraine, Man., on Dec. 22, 1994 to Wink, a farmer and truck driver, and Vicki, a secretary for Manitoba Hydro. Taylor had an older sister, Danielle, and a younger one, Hillary. The family lived on a farm near Napinka, Man.

Taylor was colicky her first three months. She’d cry from 9:30 p.m. to 2:30 a.m. every night. “You could set your clock by her,” says Vicki. Wink walked the floor all night with Taylor, who smelled like pickles from gripe water, which settled her tummy.

The family enjoyed playing together on the huge yard of their 500-hectare farm, where they raised beef cattle. The girls played on hay bales when they were younger and everyone competed in show-no-mercy family badminton games. In winter they played hockey on a rink Taylor sometimes made and built snow forts in huge drifts that piled up along their tree line.

Taylor, who was in 4-H as she attended Melita School, was an animal lover. There were a slew of dogs, cats and hamsters throughout the family history, including Jazz, Roxie, Max and Flame. As sister Hillary put it, Taylor “was the type of person who goes to a party and makes friends with the dog.” Her favourite pet was Kozmo, a Shih Tzu-terrier cross that the Renwicks got when Taylor was 12. Taylor fell in love with Kozmo when a couple regularly brought the puppy to local baseball games. Vicki and Wink were less keen on adopting the dog: Because of his size, with coyotes around, Kozmo would have to be an indoor dog. “But Taylor convinced us it would be a cool idea to have this puppy.” Wink and Vicki surprised her one day, brining Kozmo home.

Taylor loved watching movies with her sisters and had her own collection of 300 DVDs. She kept them carefully alphabeticalized in a special case, and practically demanded a signed waiver before loaning them out to anyone, joke her sisters.

Whenever she needed someone to talk to, says Hillary, Taylor was always there for her, “no matter what.” But the sisters could yak about silly things as well, often laughing their heads off by suddenly blurting out movie quotes their parents were clueless about. “We used to yell, ‘Get your s–t together, Carol!’ ” says Hillary (referring to a line from the movie Bridesmaids).

Taylor began playing hockey, first with the Melita Bisons, at 8. A “selfless and humble person,” according to her sister Danielle, the only time Taylor gloated—just a bit—was when she beat her sisters at a sport. All the girls were intensely competitive in athletics, something inherited from Wink.

Graduating from high school with distinction in 2012, Taylor moved to Winnipeg to study at the University of Manitoba. Danielle was already there, studying nursing. The two lived together for a time and both played together on the Aces, in the Winnipeg Women’s Hockey League; Taylor on defence, Danielle a forward. Quiet and reserved in the dressing room, Taylor nevertheless was often the one to pick up team spirits with her cheeky sense of humour.

Taylor originally aimed to be a veterinarian. Animals were her first love. Last February, Taylor and her family took a trip to Orlando, Fla., drinking butter beer at a Harry-Potter-themed tavern at Universal Studios and trying every ride she could, the scarier the better. But her favourite moment came when she joined her family to swim with dolphins at Discovery Cove.

Her veterinary dreams were dashed when she realized it could be at least five years before she even got accepted into a veterinary program. So, two years ago, she switched to the U of M’s athletic therapy program. She hoped to one day work for an NHL team, though she worried about the travel involved; she struggled so much with being away from family that, while studying in Winnipeg, she’d drive the 326 km home every weekend she could. “We’d tease her when she’d come home and say, ‘Don’t you want to go out and do something with your friends?” ’ says Vicki. “No, mom,” she’d say. “I just want to hang out with you guys.”

On Oct. 9, Taylor was driving to Napinka to spend Thanksgiving weekend with her family. A driver with an extensive record of traffic, alcohol and other offences was speeding down the same road, fleeing police. Police called off the high-speed chase, but, soon after, the driver crashed head-on into Taylor’s Pontiac G6. She was pronounced dead at the scene. She was 20.