An app for the basic fashion question: 'Does this look good on me?' 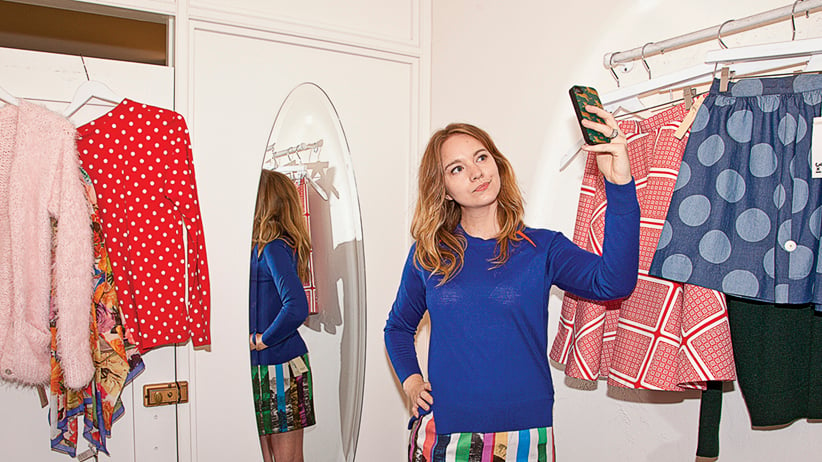 Tracie Wagman’s eureka moment came in a department-store fitting room. She had 45 minutes to buy something to wear to a black-tie gala. “I started tweeting and Facebooking out pictures of me in dresses to people who weren’t necessarily my friends, but whose fashion opinions I admired,” she explains. Within seconds, she had numerous responses, which helped her choose between a red lace dress and a strapless number with a painted image of a bridge on it. The bridge dress won, hands down.

But she also realized, “‘Hey, there’s something here—there’s a niche to fill!’” she says. Wagman, founder of the website Help We’ve Got Kids, joined forces with Anthula Nunes, co-founder of Canvas, a well-known boutique sneaker emporium and art gallery in Malibu, to start an app called Pin & Tucker, where you can invite a community of people whose fashion sense you trust to ask the very basic question, “Does this look good on me?” The community you build votes either “Yes” or “No” instantaneously—before you even leave the refuge of the fitting room.

The app taps into change-room angst, and a broader anxiety about personal style. It also reflects a broader trend of people—particularly young women—turning to strangers on the Internet for feedback on their appearance. The New York Times reported recently that a YouTube search for “Am I pretty?” turns up more than 23,000 results.

“People are very insecure,” Wagman says. But her interest is more specific, and pragmatic: Who hasn’t walked out of a store with a purchase, only to regret it soon after? Fitting rooms, with their lighting and angled mirrors, alternately seem to reflect a uniquely idealized—or horrific—version of ourselves, not to be replicated anywhere else.

Both Wagman and Nunes are big shoppers, and they did their research. “We spent a creepy amount of time in retail stores just watching,” says Wagman. “Literally, hundreds of hours watching consumers and how they shop and how retailers and salespeople act.” They also used global consumer reports from research companies like Envision Retail and Nielsen to gather statistics on how people make decisions in fitting rooms. They say the statistics they gathered show 62 per cent of shoppers now call, text, or photo-message others to get a second opinion. Peer recommendations carry 10 times more weight than suggestions from sales people. And 70 per cent of sales are lost in the fitting room.

Which is where the Pin & Tucker app comes in. You use your contacts on Facebook or Twitter to invite people whose style opinions you admire. They then receive a message noting that you require some help with your picks in the fitting room. The app is free to download, and Wagman and Nunes are working on getting celebrity fashionistas, like Rachel Zoe, to participate as judges. Wagman says using the app is easier than shopping with a friend: “Best friends have a hard time telling you the truth when something doesn’t look good on you.”

The app is not just for women. “When we first came up with the concept and briefed our developers—who were all male—on what we wanted to do, they all freaked out about it,” Wagman explains. “Men, too, are indecisive and want to look good. If they’re 40 years old, they know they can’t really trust the opinion of a 16-year-old sales clerk. So we made the app gender-neutral.”

Wagman and Nunes plan to expand into areas like home décor, and hope to get retailers like Banana Republic on board. The app could also potentially alert store employees that they have undecided customers in their change rooms so they could help put an outfit together, Wagman notes. A store could then later email a Pin & Tucker user who didn’t make a purchase, perhaps offering a discount if they still wanted the item.

Of course, Wagman is more than familiar with the flipside: “I bought a yellow jacket recently and my husband and even my best friends were like, ‘Whatever compelled you to buy that?’ ” she says, laughing. “So this app will also help mitigate returns, because people will be making better decisions.”