Anonymous breaks up with Wikileaks

There's a paywall between them now 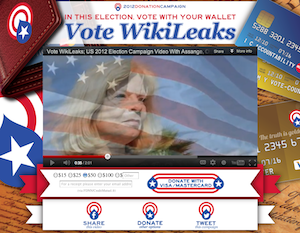 From time to time I’ve argued that Julian Assange is an epic donkey whose ego, personal agenda, and lust for celebrity infamy supersede Wikileaks’ stated goal to “open governments.” Each time I’ve done so, I’ve been labelled an MSM (mainstream media) shill, an establishment hack working to discredit a disruptive but crucial voice. Whether these sentiments are expressed in comment sections or in emails to me, some invariably contain the phrase “We are Legion” and are signed, Anonymous.

Now, Anonymous (the amorphous Internet culture/movement often described as a “hacker group” ) has broken off with Wikileaks. Why? Because Julian Assange has opted to monetize the data he leaks.  Millions of documents have been shoved behind a Wikileaks paywall. To see them, users are asked to whip out their credit cards and donate to Wikileaks (a.k.a. the Julian Assange legal defense fund). Another option is to tweet the donation form or post it to Facebook, in an attempt to take the fundraising campaign viral. It’s very tacky, it betrays Wikileaks’ mission, and it has pissed off Anonymous.

No one voice speaks for all of Anonymous, but the collective does have certain influential channels that dictate the mood of the horde. One of these, AnonymousIRC, broke with Wikileaks in a public statement:

[The Wikileaks mission] has been pushed more and more into the background, instead we only hear about Julian Assange, like he had dinner last night with Lady Gaga….The conclusion for us is that we cannot support anymore what Wikileaks has become – the One Man Julian Assange show.

An unattributed post to AnonPaste  goes even further, basically declaring war on Wikileaks:

To this day, not ONE single WikiLeaks staff are charged or incarcerated. However, Anonymous has 14 indicted (facing 15 years) for online protests defending WikiLeaks – and one [Jeremy Hammond] in prison and facing 20 years for allegedly supplying the Stratfor GI Files… Despite that fact, WikiLeaks has chosen to dishonor and insult Anonymous and all information activists by prostituting the Stratfor Files…Anonymous has had enough.

… No longer will Anonymous risk prison to defend WikiLeaks or Julian Assange from their enemies… Anonymous turns it’s back on WikiLeaks.  We are preparing for the media a detailed dossier of all the un-ethical actions perpetrated by WikiLeaks that we have ignored for so long.

The problem with Anonymous being a faceless mass of unknown operatives is that there’s nobody to whom I can say “I told you so.”