Exhuming an anti-comic book law to punish a gory website 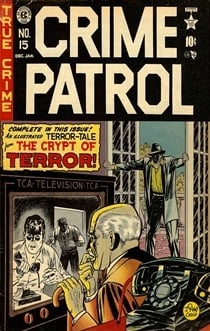 Once upon a time, America was terrified of comic books.  In the ’50s, crime and horror comics, the kind pumped out by the glorious schlock imprint EC Comics, became a target for moralizing lawmakers. A psychiatrist named Fredric Wertham lent pseudo-scientific credibility to funnybook phobia in 1954 by writing Seduction of The Innocent, an influential screed against lurid comics that led to a Senate subcommittee on juvenile delinquency. The scrutiny lead to formal self-censorship within the industry. With the Comics Code Authority in place, EC died, and its publisher, William Gaines, changed the format of his humour book MAD from a comic to a magazine in order to evade the rubber stamp of the CCA. As silly and as destructive as the funnybook witch hunt was, it never resulted in anti-comic laws being passed in the United States.

In Canada, however, an anti-comic book law was already on the books, and remains in place today. In 1949, after a murder was committed by a couple of kids in B.C. who happened to be comic readers, Section 163 was added to the Criminal Code, criminalizing anyone who “makes, prints, publishes, distributes, sells or has in his possession for the purpose of publication, distribution or circulation a crime comic.”

Titled “Offences Tending to Corrupt Morals”, Section 163 also makes it an offence to sell or advertise abortion methods, “exhibit a disgusting object” or publish information about restoring sexual virility. In other words, it’s one of those loony old laws that few people remember or obey, and which police never enforce.

Almost never, that is.

Edmonton’s cops themselves can’t remember ever charging someone under Section 163 until yesterday, when they charged Mark Marek with corrupting morals for hosting Luka Magnotta’s alleged snuff film on his Best Gore website. Best Gore (which remains online) is a website dedicated to awfulness. Videos of accidents and murders and war atrocities are submitted, posted, and discussed by a community of, well, how would you describe them? Some would call them perverts, sickos and freaks. Some of them call themselves truth-hungry realists who refuse to turn away from the realities of human atrocity. I might call them a bunch of self-serious pseudo-goths who really need to get dates. All of the above and more are likely accurate, since there are millions of them: Best Gore is wildly popular, and gets 15 million page views a month.

Last summer, after he first came under scrutiny by the authorities, Marek gave the CBC show Day 6 an interview in which he defended his site, and pointed a finger back at the cops, claiming that members of his community linked the video to Magnotta four days before the police were on the case, at a time when Magnotta was allegedly still in his apartment with victim Lin Jun’s body. According to Marek, a Best Gore user tried to tip off Montreal police, but was ignored. You can bet Marek will bring this up again in order to invoke the “in the public good” defence, which can nullify all of the moral corrupting behaviour described in section 163.

I’m curious about the impact this case might have on freedom of expression online, should it go to trial. Canadian law has yet (to my knowledge) acknowledged the distinction between pre-moderated user generated content, which a website owner vets before posting, and post-moderated user content, which is automatically published and then taken down if problems arise. A broad finding against Marek could be a problem for YouTube, Twitter, and many more sites that host a magnitude of content that couldn’t possibly be pre-moderated. And if Marek is found guilty, what of the thousands of other gory videos his site hosts, or the millions of questionable videos hosted by other sites?

Of course, it’s entirely possible that the case will be thrown out of court before things get that far. Marek’s website is to certain modern sensibilities what comic books were to a nervous 1940s establishment: a gross aberration to be surgically removed by any means necessary. Ironic then, that today’s police have found support for their witch hunt using yesterday’s pitchfork. It seems possible to me that they just didn’t like Best Gore and charged Marek with whatever law they could find. A thinking judge might agree.