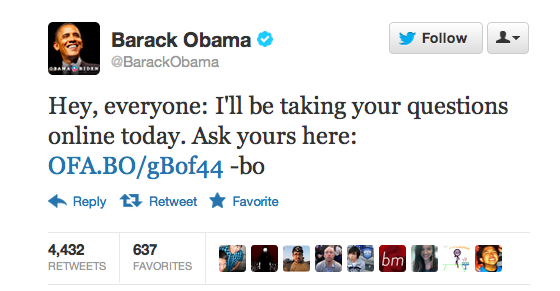 The social news site Reddit has a signature feature: AMAs. Guests ranging from prostitutes to film directors hop on the site and implore “Redditors” to “Ask (them) Anything.”  This afternoon, Barack Obama stole the Internet for a half hour by doing a 3o minute AMA.

But did he really? AMAs are notoriously tough and revealing. Celebrities hoping to exploit the forum for cheap publicity get eaten alive. When Woody Harrelson refused to answer personal questions (or any questions unrelated to the movie he was promoting)  he was pounced on. He responded by fleeing his own AMA and quickly became an Internet laughing stock. Of course guests receive too many questions to answer, so their selection of which ones to address dictates whether or not they are deemed to have approached the forum in good faith.

As Obama’s AMA wraps up, here’s a look at how he did:

Questions Obama answered (or at least, the ones he responded to):

As the afternoon progresses and the hive dissects Obama’s performance, we’ll find out whether the move was a savvy way to reconnect with young voters or if it backfires as pandering and patronizing.

Here’s a crucial question that may decide the above: Did Obama reveal anything substantial?