It's one of the key languages we use to communicate. Yet, most of us are illiterate. 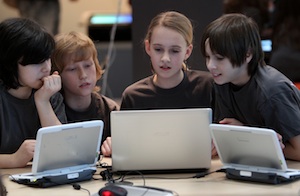 As Canada’s kids embark on a new school year, they will be compelled to read novels, write essays, conjugate French verbs, dodge balls, and develop dozens of other skills that will prove more or less worthless in the job market.

And that’s okay. Whether or not most jobs call for essay writing (as mine anachronistically does) writing an essay is a good thing to know how to do. It teaches you how to reason, how to analyze, how to argue and how to communicate. All of which will help a child upon graduation, and will probably help them do their job, if not find a job. Regardless, an education should be more than 18 years of vocational training.

Yet would it kill our schools to provide a little mandatory job training? Somewhere in K-12 or beyond, shouldn’t someone be making sure that each kid will have a marketable skill or two to fall back on? All of which is to say that I have too many friends in their thirties with B.A.s and M.A.s who still struggle to find work. But I don’t know a single coder who isn’t gainfully employed. Beyond my anecdotal research:  programmers are in constant demand, even as opportunities for youth employment grow incredibly scarce.

The world needs more programmers, and some schools are taking steps to create them at the earliest levels. Estonia has just become the first country in the world to teach first graders how to write computer programs. It’s something Canadian kids will have to wait until high school for, unless they decide to teach themselves, which is how it’s usually done.

This is not to say that our schools are anti-tech, filled with luddite educators who hate and ban electronics. Canadian schools have made remarkable progress. It’s hard to find a school without a computer lab, and more and more institutions are moving beyond this ghettoization of tech by welcoming tablets and phones into classrooms. Yet what do kids do on these computers? Usually, they play with educational apps and games or do online research. In high schools, they may learn how to use popular office programs like Excel or Word. How these programs came to be remains a mystery to most students and teachers alike. Those who do take elective programming courses have usually been coding at home for years. And there are depressingly few girls in these classes (depressing, I’m guessing, to the boys who take these classes as well).

Why the resistance to teaching computer programming earlier? There is still a sense that coding may be too practical, that mandatory programming classes would be like forcing a kid to take auto shop — a clear sign that you’ve thrown in the towel on little Oliver ever becoming a doctor. This prejudice ignores the last thirty years of progress. Kids should be required to learn at least a little bit about programming for the exact same reasons that we require them to learn a little English, a little math and a little French. Code is one of the key languages that we use to communicate with each other.  It’s a basic building block of more and more of our culture and economy. To be totally code illiterate, as most parents and teachers are, is to be troublingly ignorant.

And that may be where the true problem lies: in order to teach kids to code, we need teachers who can code. And coders, again, are in short supply.