Minnesota Senator should be "locked up," he tells radio station 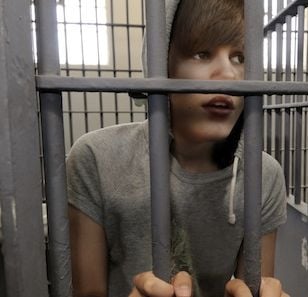 So what is it that made the little guy so mad?

Klobuchar has introduced legislation that, much like Canada’s pending Copyright bill, might make Justin Bieber a criminal.

In the States, Klobuchar’s Felony Streaming Bill will criminalize Youtube cover songs when the intent of the upload is commercial. Here in Canada, Heritage Minister James Moore’s Copyright Modernization Act will similarly outlaw user generated uploads with commercial intent. So, if your kid is singing a Chris Brown song just for fun, have at it! But if she or he is singing the same song in order to break into the music industry (as Bieber was), then you’re looking at a penalty of up to $20,000 per song in Canada, and up to five years in jail in the U.S. (An advocacy group there has launched an amusing “FreeBieber” campaign to drive the point home–Bieber’s lawyers are not amused.)

Both Klobuchar and Moore argue that their laws are not meant to punish the Biebers of the world, but rather target nasty pirates who copy and paste other people’s work, adding nothing creatively, and pocketing the proceeds without compensating the original creators. For example, they say, these measures would hypothetically stop someone from ripping and streaming an episode of Glee to profit from the ad hits the video traffic would generate.

The problem is, it’s pretty difficult to come up with language that differentiates nasty pirates from aspiring teen idols. Both stream versions of other people’s content in the hopes of making money. Bieber may not have expected to profit directly from the web hits generated from his early Youtube covers, but he certainly hoped to profit from the exposure this might create. What kid singing into a webcam doesn’t dream of being discovered online? And the hypothetical Glee streamer didn’t profit from the pirated show itself, but from the tangental ad impressions created each time someone visits the page. Neither would-be infringer is selling the copied content per se, but both intend to commercially exploit the popularity generated by repurposing other people’s stuff.

If both bills were law, Chris Brown’s label could have argued that Bieber had money on his mind, and that the millions of hits his cover-version generated had an adverse effect on Brown’s own commercial prospects (if those 36 millions viewers had watched Brown’s version instead, just think of how many more albums he might have sold!).

Of course, the difference between the two types of potential infringement is creativity; Bieber didn’t hold up a microphone to his stereo–he sang Brown’s tune, putting his own squeaky clean spin on it. But how do you create legislation that captures the concept of creativity? Demand that a copier creatively re-interpret a protected work in order to get a pass, and the Glee-pirate could throw a snarky commentary track or a dancing baby gif on their upload and be in the clear.

The obvious solution to this vexing quandry is to permit both kinds of streaming. It’s impossible to stop the Glee-uploaders of the world, and the adverse impact they have on authors of original works is itself debatable. Does it hurt the creators of Glee when people watch it on Megavideo instead of on TV? Yes and no. The show’s ratings may suffer, but its popularity may improve. The viewer who tries Glee out on Megavideo may watch it on TV the following week, or buy the DVD, or tell a friend about it. The two friends may then parody it in their own video and launch their own TV career.

The world isn’t neatly divided into creators and consumers, producers and pirates. As the Biebs put it himself, “people need to have the freedom…people need to be able to sing songs.”