The U.S. copyright war is headed for a Hollywood-esque happy ending–unlike the one in Canada 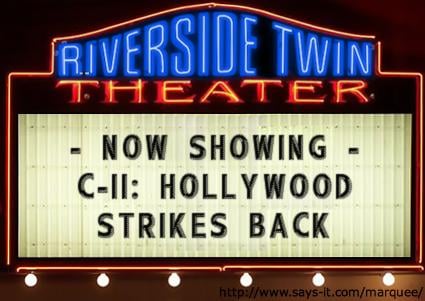 Correction: in an earlier version of this post, I bungled the numbers of every copyright bill mentioned, each time they were mentioned. You realize that I’ve been covering this stuff for years, right? I regret the error, and will try to get more sleep tonight.

A ragtag group of plucky idealists stand up to bullying corporations who seek private profit at the expense of public freedom. The protesters’ message spreads, their numbers swell, and the people stand united. They demand action from politicians whose allegiances have strayed, and they speak truth to power in creative and inspiring ways. Their voices combined cannot be ignored. The people prevail.

It’s awfully cheesy—a Hollywood remake of a much darker foreign film. In the original Canadian version, the people got screwed.

That’s how SOPA is different from Bill C-11. When the anti-SOPA protests were heating up a few weeks back, I’ll admit it, I was bored. I’d seen this movie before, and I knew how it was going to end. I was wrong. SOPA is dead, while Bill C-11 is set to pass.

In 2008, when 100,000 Canadians protested an earlier anti-piracy bill, they were patronized and placated with a hollow public consultation. Earlier they had succeeded in stalling a bill to death, but then came the predictable sequel, in which the monster rose from the grave to terrorize us again (did you like C-60 better than C-61? That regressive prequel C-32 sure sucked.) Like all bad horror franchises, the monster outlasted our interest in it, and Bill C-11 (the series reboot) is set to become a law, with the frightening digital lock protections intact.

Heritage Minister James Moore promises (threatens?) that there’s little room for change in the bill, yet Micheal Geist points out that there’s much backroom industry pressure to alter the legislation to be more punitive, not less. The specific changes that lobbyists request have much in common with SOPA.  Website blocking and intermediate liability are among the pressure points, and Geist makes a compelling argument that if Moore adopts these provisions, sites like YouTube could be seen as lawbreakers. There’s also the suggestion of disconnection penalties for accused infringers, a reprehensible tactic that’s failing to curb piracy in France.

All of these are SOPA-esque measures that Americans rejected. But the international market has saved many a Hollywood flop. Maybe we’ll eat their garbage.