Bitcoin: A new fixture at one Canadian university 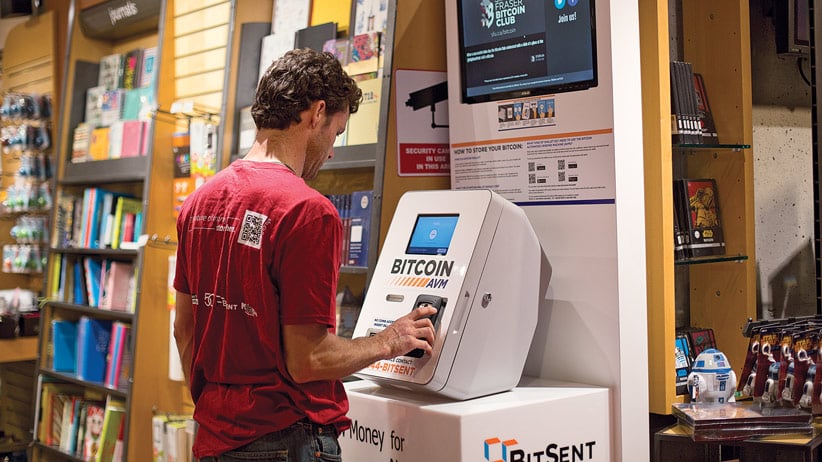 Within weeks of Nasreen Mohsin moving to Vancouver in September 2015 to start a master’s of engineering at Simon Fraser University, one of her friends back home in India had an emergency. Mohsin won’t divulge the specifics, but her friend needed 6,000 rupees, or about $120—and fast.

One option was to use a traditional money-transfer service, like Western Union, but her friend recommended they make the transfer via Bitcoin. Not only would it be fast, but the fees would be next to nothing.

Bitcoin is a global currency that only exists digitally. Who prints it? Nobody. What’s the central authority or bank that controls it? There isn’t one. For the layperson, Bitcoin is useful as a way to transfer money from point A to point B—as long as both places have access to the internet—with no need to go through a bank and, therefore, incurring virtually no transaction fees.

Fortunately for Mohsin, getting her hands on the digital currency was extremely convenient. “The nearest [Bitcoin] ATM was at SFU,” Mohsin says. In May 2015, Simon Fraser became the first Canadian post-secondary institution to install automated Bitcoin vending machines (known as AVMs) at bookstores campus-wide.

Mohsin doesn’t plan to use Bitcoin to buy books, but she’s grateful it was there to help her friend back home. Mohsin deposited $120 into the AVM machine, scanned the QR code on her cellphone and received about one-third of a Bitcoin in her virtual wallet. She transferred the Bitcoin to her friend’s virtual wallet, a process that’s as easy as sending an email. Within about 20 seconds, the transaction was done, and her friend converted the Bitcoin into 6,000 rupees.

The university wouldn’t say how many digital transactions have come through the machines or how much Bitcoin has been bought. “It’s a small percentage of the student population [that’s using it], but at least some people are,” says Mark McLaughlin, the university’s chief commercial services officer, ancillary services.

For most students, using Bitcoin to buy books is a novelty. But there’s an incentive for the school. “Essentially, SFU is not paying any transaction fees when they accept Bitcoin,” says Mike Yeung, founder of the SFU Bitcoin Club. Visa and MasterCard, for example, charge retailers up to 1.5 per cent of the value of each sale. With about 30,000 students at SFU and an average semester’s worth of books and supplies for an undergraduate costing $1,020, according to university figures, “that can add up to be pretty substantial over time,” Yeung adds.

McLaughlin says the school didn’t adopt Bitcoin because of financial incentives. Rather, there were two objectives in accepting the digital currency at bookstores at each of the three campuses in Vancouver, Burnaby and Surrey. First, it started a dialogue on campus about disruptive technologies. Second, students could learn about Bitcoin (as could staff, for that matter). The project also inspired some entrepreneurial philanthropy, such as when the SFU Bitcoin Club lobbied the university to accept donations via Bitcoin in August 2014. Yeung and SFU alum Scott Nelson donated 10 Bitcoins, equivalent to nearly $6,000 at the time.

Why not donate using Canadian dollars? “Bitcoin is what I have,” says Nelson, an information technologist and a believer in cryptocurrency since he started using Bitcoin in tech startups about four years ago. “I want to promote the idea of philanthropy using Bitcoin. You want this stuff to circulate.”

The donation went toward a co-op project that sent two students to India to help women and girls victimized by human trafficking. Each student was given one Bitcoin, while the remaining eight Bitcoins were converted to Canadian dollars to help fund the trip. After all, not every restaurant, taxi and airline accepts Bitcoin—though many might soon, considering the currency is expanding to campuses across Canada.

For example, the McGill Cryptocurrency Club have launched paper airplanes with QR codes that could be used to receive $5, $10 or $20 worth of Bitcoin during frosh week. Which raises the question: where can students use Bitcoin to buy a beer?