Digital analytics is hitting the restaurant business. What will the algorithms say about you as a customer? 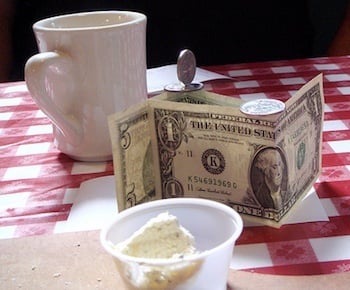 Data-mining is hitting the restaurant business.

Wired reports on tools like, Compeat, and Hotschedules, which provide managers with daily anaytics, breaking down what food and drink was sold, to whom and by whom. One expects this sort of thing at Milestones, but Wired reports that celebrity chefs like Tom Colicchio and Daniel Boulud are also embracing the technology in their restaurants.

The focus right now is on servers. Perhaps a manager is fond of Tina, the friendly and competent waitress whom customers and cooks both seem to love. Well, she may be a nice person, but her data reveals that poor Tina hasn’t been moving enough vino lately, and remember that slightly smelly skate that chef tried to unload in an over-sauced special? Tina only sold four of them last night. Seems that when customers ask her what’s good, she actually tells them. Time to have a chat with Tina.

Wired anticipates this scrutiny will migrate from restaurant staff to customers. Of course, hosts have been tracking their clientele for centuries. Habitual big-spenders get nice tables and a couple of drinks on the house, teetotaling appetizer nibblers get wobbly, ignored tables by the bathroom. Knowing (and predicting) who’s who is part of the art of running an eatery. But data hates art. Art can’t be counted. So why rely on instinct when you can generate numbers? If a couple spent a fortune at a joint two years ago, who’s going to remember them now but a computer?

It’s hard to argue that these tools aren’t effective. Restaurants are businesses, and notoriously difficult ones at that. If I owned a bistro and could “Moneyball” my operation to maximize profits, I probably would.  But an over-reliance on digital analytics could bring trouble to an industry built around hospitality and human interaction. Weed out the servers who feel like customer’s friends, or train them to be stat-obsessed foie gras and Barolo pushers, and eventually patrons will realize they’re spending more than they meant to while leaving feeling fleeced and uncared for.

People go to restaurants to be catered to and delighted, not to be hustled by algorithms.