Disrupting the pink aisle with GoldieBlox 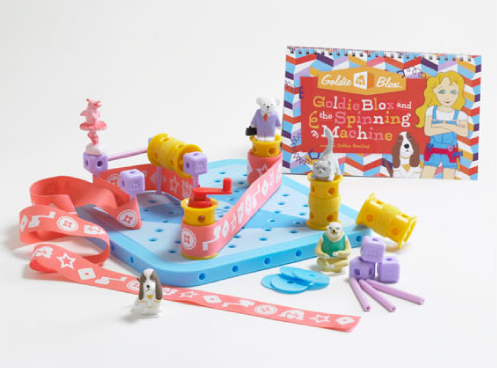 GoldieBlox is a new line of toys, designed to trick little girls into building things for fun.

I don’t think that’s a snarky assessment: inventor Debbie Sterling, an engineering graduate of Stanford University, raised capital for GoldieBlox on Kickstarter, where she explained that it’s going to take more than pink lego to get girls interested in construction toys. In a pitch seemingly designed to inspire/enrage/perplex Women’s Studies majors, Sterling shared her gender revelation: little boys, she says, excel at spatial skills, and are therefore drawn to hands-on construction play. Girls, on the other hand, “have superior verbal skills. They love reading, stories, and characters.” So, to get girls excited about building, GoldieBlox hides its true engineering nature in a cotton-candy coloured storybook dressing (pink is notably underrepresented). “GoldieBlox and the Spinning Machine,” the first in what Sterling hopes will be a series of toys, leads girls through an interactive picture narrative that just happens to result in the construction of a neat, whirling matrix of spindles.

As a former boy with negligible spatial skills and superior verbal abilities who still likes playing with his son’s Duplo, I can say that I find GoldieBlox unappealing. The joy of Lego and other building toys for me has always been the lack of rules, stories or instructions. You just dive in and start making stuff (unless you’re one of those anal kids who needs to make exactly what’s on the box). GoldieBlox seems needlessly complicated to me. But I’m a grown man, not a little girl, being steered constantly towards the pink princess aisle at Toys R Us. Sterling says she rigorously tested GoldieBlox with real kids, and is confident that the product she’s arrived at will succeed in delighting the imaginations of girls, and not just the politics of their parents.

GoldieBlox burst past its $150,000 Kickstarter goal last fall, earning over $285,000 from parents eager to provide their daughters with something different. Sterling just inked a distribution deal with Toys R Us, despite having symbolically placed the giant toy retailer in her crosshairs in this adorable rallying cry of a Youtube video: