Popping up at upscale hotels and weddings, drones are the new status symbol 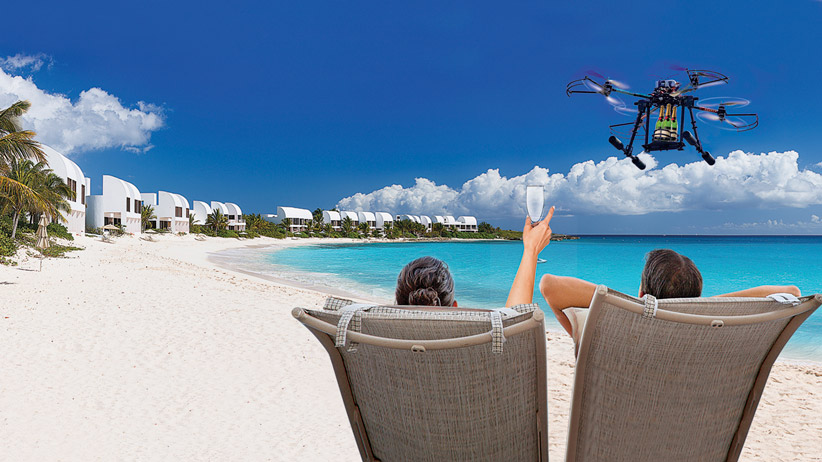 On Memorial Day weekend at Las Vegas’s Marquee Dayclub, as 2,000 nearly naked clubbers were grinding in the sunshine to electronic music, an unmanned black drone descended from above. In a hanging bucket was an unopened bottle of champagne; it was collected by a dancing patron in a purple bikini. Then the drone flew away through the palm trees. The crowd cheered.

The service is a perk of spending $20,000 on bottle service. The special guest who ordered it, the Marquee PR team notes, “prefers to stay under the radar.” But the video, posted by the club’s co-owner, quickly went viral. As has news of other recent drone delivery beta tests: Domino’s Pizza in the U.K., Valentine’s Day flowers in Detroit, university textbooks in Australia, and even sushi in London hope to arrive via drone.

Most, for now, are marketing stunts that reflect pop culture’s increasing fascination with, and reimagining of, drones. “Even just a few years ago, if I said ‘drone,’ you’d think of a predator in Iraq,” says Dave Kroetsch, president of Aeryon Labs in Waterloo, Ont. “Now drones are mainstream enough that people are calling us for uses in the luxury world. Customers have new ideas that we never even thought of.”

One Ontario organization wanted drone drink delivery to impress at a gala (much like the Smithsonian’s “Future is Here” festival in May, which flew drones for effect). Photographers want drones for aerial shots and wedding pictures—like the one hired by a U.S. congressman for his wedding, or the one that recently went rogue, striking a groom in the head, and racked up two million YouTube views. “Somebody’s flying it around their yacht for security reasons, somebody else is playing with it in their backyard just to show off,” Kroetsch says of his clients. Most drone use is for law enforcement, military or industrial purposes (power line inspection, oil and gas mapping, 3D mine models), but somewhere around three per cent of Aeryon’s sales are for pure luxury.

While Kroetsch keeps the exact number of drones he’s sold top secret—more than a few hundred per year is as much as he’ll reveal—he will say business is booming: Over the past five years, his drone manufacturing business has doubled annually. An outfitted Aeryon drone with night vision and infrared cameras can cost as much as $150,000; a simple, non-Aeryon model can go for as little as $100 on Amazon. Even Best Buy stocks a handful of options, retailing around $400.

Basic models are scooped up by Alan Gardner, an IT consultant and founder of Ottawa Drones, a small organization of hackers who focuses on drone development. Last fall at the University of Ottawa, Gardner showcased the work of his volunteers. “One person wrote an autonomous photography application that flew around and found people smiling,” he says. Others used facial recognition to identify and follow someone around; one tried to complete an obstacle course. None delivered champagne. “Even small ones are pretty noisy and generate a lot of wind, and the blades can be intimidating,” he says. He thinks drones would be the opposite of the romance and ambience sought by most hotels. “It just makes more sense to send a person.”

But, for a rare kind of traveller, drone delivery is the right sort of novelty. Guests at the $10,000-a-night Alexandrite Suite in San Francisco’s Casa Madrona can spend $7,500 more to have room service via air—to their balcony or a yacht in the bay, naturally.

In America, there’s incentive to enjoy drone delivery while you can, as the FAA is quickly cracking down on commercial drones. In Canada, we’re still operating on a case-by-case basis under Transport Canada. Commercial drone use requires an operations certificate with individualized restrictions (don’t fly near airports, over people or roads; ensure the operator always has a clear line of sight of the drone), whereas recreational use on private property—a cocktail party in your backyard, for example—is just fine. It’s legal, but perhaps not practical. “But when you have a burgeoning field like drones, people want to apply it to whatever they’re doing,” says Kroetsch. “Even if it doesn’t quite fit.”