Facebook: If anything was exposed, likely it was how little we trust it

Is the glitch with the social network or with its users' brains? 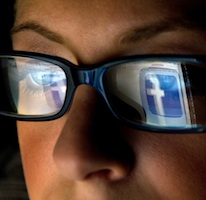 Either Facebook has screwed up bad, or the world is experiencing a paranoid delusion, en masse.

Metro France broke the story (first time I’ve said that) earlier today. It seems that private messages from users’ Facebook archives have popped up on their public timelines! Metro says they confirmed that the glitch has exposed user to user mail from 2007-2009 on some smattering of accounts. As word of this breach went viral on Twitter, Facebook users worldwide raced to their screens to see if they were affected, and new reports of compromised accounts began popping up in country after country.

Except that it may have never happened. Facebook has announced that after investigating the matter, they are satisfied that nothing happened at all. Afflicted users say this is impossible, and point to revealing public messages containing phone numbers and addresses as proof.

Here’s a likely scenario: someone was navel-gazing into their digital past and was shocked to see something on public display that they were absolutely certain was a private message. Except that it wasn’t.

Once this patient-zero user yelled “fire!” on a crowded Internet, thousands scoured their own Timeline in a paranoid tizzy, and surprise! A handful of users also discovered public posts they could swear were originally private. I checked my own timeline when I heard about the “leak,” and though I found things online from 2008 that I wish I had never made public, the fact is I kinda know that I did.

That’s my best guess: we exposed ourselves, we forgot about it, we saw it years later and are now blaming Facebook. Perhaps a real glitch will be revealed, at which point I will eat these words. But at this early moment, I’m thinking that nothing was exposed here except how little we trust Facebook, and how little we understand the extent to which we compromise ourselves on it every day.