Facebook's secret? Rolling with the punches

The ubiquitous social network somehow always comes out on top 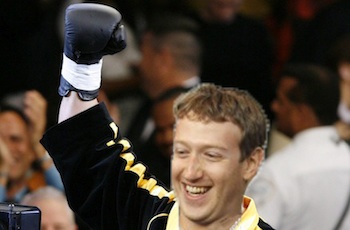 If Facebook were a fictional movie character, it would have to be Rocky Balboa. Like Sylvester Stallone’s underdog boxer, Facebook routinely gets its figurative face punched in, but somehow keeps on going. Whatever you think of the social-networking service, on the eve of its initial public offering–expected to be the largest ever for a U.S. tech company–it’s hard not to admire the company’s ability to roll with the punches.

Facebook has repeatedly sparred with watchdogs and users alike over its constantly changing privacy settings. Canada actually led the way, with Privacy Commissioner Jennifer Stoddart giving the web service a good spanking back in 2009, with other countries following suit. Even before that, the company caught heavy flak for its Beacon effort, an ad platform that displayed on Facebook users’ activity on other websites.

Unsurprisingly, privacy has been the website’s biggest ongoing concern. Some observers are understandably worried that the privacy invasions could get worse once Facebook is a public company that is under constant pressure to deliver increasing profits to shareholders.

The violations and missteps have made a good chunk of users wary, with some even organizing a “quit Facebook day” back in 2010. Only an estimated 35,000 or so actually deleted their profiles on the given day, but the damage to its image was done. As PC World put it at the time, Facebook has established itself as the service that users love to hate. The constant redesigns don’t help either.

It’s therefore not surprising that many believe Facebook to be a passing fad, much like MySpace and some of the other social networks of yore. In a study released earlier this week, nearly half of Americans said so. Investors may partially agree, with many saying that the amount the company is seeking in its IPO is way too much.

Yet another controversy broke out this week with the news that General Motors is pulling its ads from Facebook on the grounds that they don’t work. Having one of the biggest advertisers in the U.S. pull such a move just days before the IPO is surely one of the year’s “oh, snap!” moments. It’s one thing for GM to quietly pull its advertising, but the timing seems like it’s meant to deliberately deliver some poop onto Facebook’s doorstep.

My personal gripe with the service touches on the familiar walled garden criticism, that Facebook has created its own little fortress that doesn’t play well with the rest of the internet. My blogging tool does a good job of telling me exactly where all my traffic comes from, except when it comes to Facebook. I get a decent amount of traffic from the site, but who is posting my stuff and what are they posting? I’ll never know. I suspect Facebook has a mechanism wherein I could pay to find out such information, but the thought of doing so is abhorrent given the way the rest of the web works.

Add in to all of this a movie that made founder and wunderkind Mark Zuckerberg look like a giant ass and it’s clear that Facebook is at least the most controversial Internet company ever, if not the most hated. Come to think of it, maybe Rocky Balboa isn’t a good comparison. He was, after all, a character that everyone wanted to see succeed. Maybe the proper analogy for Facebook is in fact the Mark Zuckerberg in The Social Network—it’s succeeding in spite of everyone else.