How hockey can change its energy-hogging, carbon-spewing ways

It takes a huge amount of hot water to make the ice in hockey rinks. How technology is helping rinks go green. 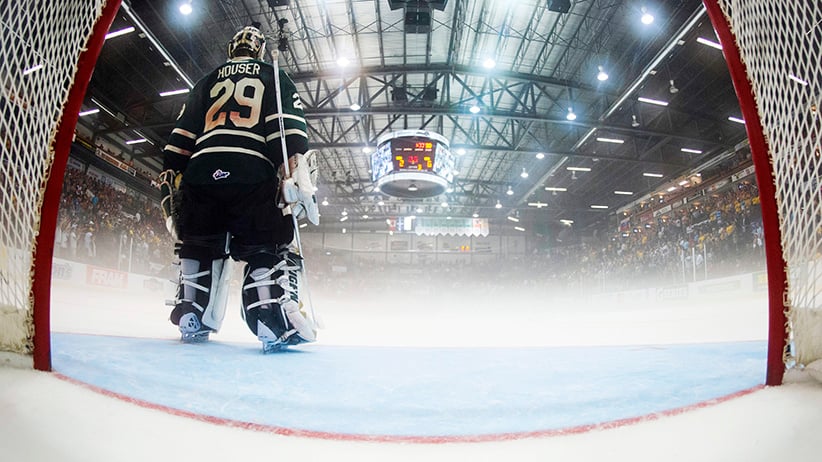 London Knights goalie Michael Houser stands in front of his net while fog cover the ice during the third period of their round-robin Memorial Cup ice hockey game in Shawinigan, Quebec. (Vincent Ethier/Reuters)

Canada’s passion for ice hockey has some decidedly un-wintery consequences in terms of energy use at arenas across the country and their resulting carbon footprints. One Vancouver-based company, Swich Services Inc., is trying to change all that via REALice, a European-developed water treatment system that radically alters the way indoor ice is made and maintained. Maclean’s recently spoke to Florian Gabriel, the firm’s managing director, about how ice can go green and the difficulty in altering frozen perceptions.

Q: How big a contributor are hockey rinks to our greenhouse gas problem?

A: Let’s just try to get a handle on the amount of flood water being used. There were some stats, produced by the Ontario Recreation Association back in 2008, that said an ice-resurfacer runs 2,595 times a season, per ice sheet, holding 665 litres of hot water each run. That puts us in the range of 1.7 million litres of hot water per ice sheet, per season. Ontario has about 1,000 ice sheets, so 1.5 billion litres of water, just for it alone. For all of Canada, where there are around 3,000 ice sheets, we’re in the range of four to five billion litres of hot water, usually heated with natural gas. Then there’s back end, and all the electricity used to power the compressors to cool that water down to the freezing point keep the sheets cold.

Q: Where does the REALice technology that you’re marketing come from?

A: It originated in Malmo in southern Sweden. There’s a company called Watreco that innovated this vortex generator. Essentially, it’s a 3D-printed valve that swirls the water in such a way that it degasses it, taking out the micro air bubbles, so that you can make fantastic ice. The first unit was deployed in 1998 at the Malmo arena, and that’s still in use. That one was actually hand-carved.

Q: How does it work?

A: Think about a tornado, how the spinning creates a low-pressure zone and draws everything in toward the centre. That’s what allows us to separate out the micro-bubbles from the water. The ingenuity is the intake holes that are drilled in such a way as to create a multi-faceted vortex inside the valve. There’s no need for any additional energy input or maintenance.

Q: Why are bubbles such a big problem in ice-making?

A: People have been making artificial ice for more than a century now. I’m sure there were early experiments with cold versus hot water. But cold water holds three times as many trapped air bubbles, so you just don’t get a good sheet of ice. There’s too much insulation, and it’s brittle. Ice made with hot water—anything above 70° C—is just a lot smoother. So our technology simulates hot water by removing those air bubbles.

Q: So is it the same as the ice made with hot water, or better?

A: That’s a tricky question—ice quality is so subjective. But from a scientific point of view, the ice crystals created by using de-gassed water are larger. Which means the ice sheet is denser, which makes it faster and holds up for longer.

Q: Does it change the process of making ice?

A: No, not at all. That’s the beauty, you can be up and running in a few hours. We just attach our system to the main water pipe, de-gas everything and then you run your ice-resurfacer normally.

Q: But I understand that there’s been some resistance to this technology from ice-makers. Why?

A: I think it’s just because it’s such a radical concept. Everyone knows you can’t make good ice with cold water. You just can’t. So they’ve been using hot water for decades. And suddenly we’re telling them that yes, you can use cold water. You just need to shoot it through this valve.

Q: So how do you overcome those ingrained beliefs?

A: Here in British Columbia, we’ve had a pilot program with a utility company, FortisBC, that has really helped. They rolled it out to 10 sites and measured its effectiveness. We’ve been letting rinks rent the system for eight to 12 months so they can try it. Seeing is believing. We’re at a point now where municipalities are going to their rinks and asking how they can reduce their carbon footprints. Arenas are one of the biggest users of natural gas and electricity.

Q:  Your systems sell for $33,000, but you make the argument that it quickly pays for itself?

A: For a single sheet of ice, the energy savings repay it in two to three years. If it’s two sheets, and you’re using a single filling station, it’s under two years.

Q: The NHL has been using your technology since 2010, but only for outdoor games like the Winter Classic. Is it better suited to the outdoors?

A: It creates more resilient ice—that density I mentioned before. It helps the ice hold up to temperatures that are higher than indoors. We’d love to move it inside to NHL rinks, but nothing yet. Although we’ve been endorsed by the International Ice Hockey Federation and the Swedish and Finnish federations.

Q: How much energy do you think the REALice system saves?

A: It’s not just heating up the water. It’s what you don’t need to shave off is terms of cooling down the slab, too. If you put a cup of hot water in your fridge, it takes a lot of energy to cool it down. But if you start with cold water, not so much. Our treated water has less air trapped in it, which means less insulation, which means it freezes faster. Operators can therefore reset their brine levels, allowing their whole plants to run between three to six degrees Farenheit, warmer. The FortisBC pilot program verified a 79 per cent reduction in natural gas usage, and a 10 to 12 per cent reduction in electricity usage. We calculate the combined savings at 50 tonnes of C02 per ice sheet, per hockey season.