How Julian Assange became what he hated: a TV guy 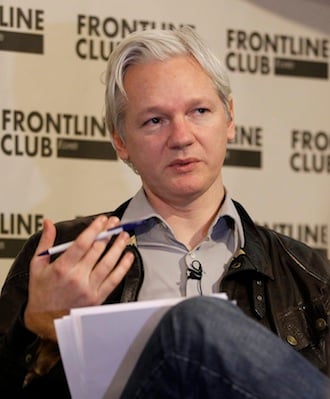 Confession: I watched Julian Assange’s TV show. I promised myself I’d ignore it, but curiosity got the better of me. I wish I’d stuck with my instinct, because it annoyed me to the extent that I’m now going to compound the problem by writing about him. Sorry everybody.

Before I unburden myself, a note to Assange’s supporters: I know you feel your guy has been unfairly maligned and mocked by an international conspiracy to defame, imprison, and possibly kill him, even though he may not have broken any laws. And I think you’re probably right–he has been. But that doesn’t mean he’s not an ass.

And let’s face it, he’s such an ass.  He establishes this in the first minute of the World Tomorrow, through an epically self-aggrandizing intro-montage that places Assange as some kind of messianic figurehead of both the Occupy movement and the Arab Spring. He overplays the victim card by running footage of a rabid Fox News commentator barking that the U.S. should just “illegally shoot the son of a bitch!” Let’s remember that U.S. senator Joe Lieberman called for Assange to be tried for treason against the American government, a fantastical suggestion given that Assange is not a U.S. citizen. And Lieberman came within inches of the Vice Presidency, so he’s by no means a cable news cartoon character. Lieberman’s is a much more telling clip of the actual persecution Assange faces at the hands of the powerful. But I guess it wouldn’t make for as good television.

The face-palms slap-on from there. Assange interviews Hezbollah leader Hassan Nasrallah, setting him up as a subject too hot for the mainstream media to handle. Of course, any Middle East correspondent would eagerly speak to Nasrallah if he would grant them the interview. The suggestion is that a mainstream media conspiracy stands between us and exposure to this figure. The truth is, Nasrallah hasn’t given an interview in six years, and likely chose Assange as the guy to break the embargo with because he could be assured a smooth ride.

He was right. Assange asks Nasrallah what kind of outcome he’d accept in Israel. Speaking in front of the rifles adorning the Hezbollah flag, Nasrallah says he’d gladly disarm for a one state-solution where Muslims and Jews lived together in harmony. Of course, Hezbollah’s charter calls explicitly for the destruction of Israel and the establishment of an Islamic State, but Assange is satisfied with Nasrallah’s warm and fuzzy answer. He’s less forgiving when Nasrallah bluntly explains that Hezbollah won’t support the Arab Spring uprising in Syria due to a political alliance with the Assad regime.  But the lightweight Assange bizarrely suggests that Nasrallah is just the guy to broker peace between the revolutionaries and Assad, because “people trust you are not an agent of the United States or Israel.” You think?

Assange concludes with an embarrassing grad student level question, where he encourages Nasrallah to somehow reconcile being a supposed freedom fighter with being a fundamentalist religious zealot. Why won’t he also “liberate us from the totalitarianism of a monotheistic god?” Nasrallah looks at him curiously, and punts.

All of which is to say that none of this was worth mentioning. Which to me is the newsworthy part (bear with me a moment more…).

Consider Wikileaks, a news bomb of epic proportions. How many thousands of headlines were contained in their data dumps? Through the use of a new news delivery medium, it changed journalism forever.

Now consider poor Julian, creating trumped up schlock for a Kremlin-backed TV propaganda unit. Using all the sizzle tricks of his hated mainstream media, he dances in the spotlight as Mr. Controversy, yet can’t procure a single headline.

Click if you must, but I watched The Word Tomorrow so you don’t have to. There’s no data there.