How MOSE(s) will save Venice

And rid the city of its iconic giant puddles 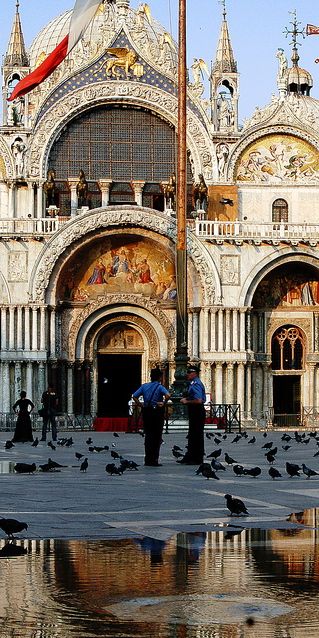 There are a number of reasons to visit Venice in the winter. For one, the weather is pleasantly cool—though not cold—and you won’t smell the canals, which tend to reek like stagnant water does in the summer heat. Most importantly, though, you might get a chance to splash around in your rubber boots in one of the enormous puddles that form around the city streets during what the locals call “acqua alta” (or, “high water”). Kids just love it.

Hurry up, though, for the puddles may soon be gone. Italians are putting in place a new system that will protect the city from recurrent flooding, sheltering this gorgeous living museum of classic architecture, art and ancient European culture that’s been subsiding at a rate of about seven centimetres every 100 years.

The phenomenon, of course, is nothing new–archaeologist Albert Ammerman of Colgate University notes it’s been happening for about 1,000 years,–but in the last century alone the city has gone under by a whopping 24 cm. It’s not just that water levels globally are rising, repeated seasonal flooding and increased motorboat activity have also shifted the somewhat unstable ground underneath the city, aggravating the problem.

Ideas to slow Venice’s descent into the sea have ranged from bizarre to brutal. One 2005 proposal, for example, envisioned pumping loads of salt water underneath the sandy ground on which Venice is built.  In theory, the earth would expand and raise the city by an estimated 30 cm. Another, rather barbarous, way of dealing with the problem–and one which has been actually put to use in certain instances–consists of tearing down old Venetian buildings that become too waterlogged and submerged, and replacing them with new structures built on solid stone foundations. The practice, unsurprisingly, has proven highly controversial.

Then Venetians turned to Moses. Well, not quite. MOSE, which means Moses in Italian, is the emblematic acronym for what in English translates to Experimental Electromechanical Module. The project, scheduled to become operational in 2014, consists of building rows of underwater flood gates that will cut off the Venetian lagoon from the surrounding Adriatic Sea, protecting it from flooding.

The Biblical  reference hasn’t been enough to save MOSE from controversy–even in an overwhelmingly Catholic country. The project has come under significant fire for its epic price tag, which is currently estimated at $6.3 billion. The Netherlands and low-lying communities in England, critics say, have found more cost-effective ways of protecting themselves form rising seawaters. Environmentalists have also voiced concern about–and taken legal action against–the amount of construction MOSE requires, particularly the need to level parts of the sea bed in order to accommodate the gates. And yet, builders and politicians assure work is going to be finished on time.

But if MOSE will deliver collective salvation to Venetians, it will also likely put an end to one of their city’s iconic mainstays: acqua alta.