In the future, bargains hunt you 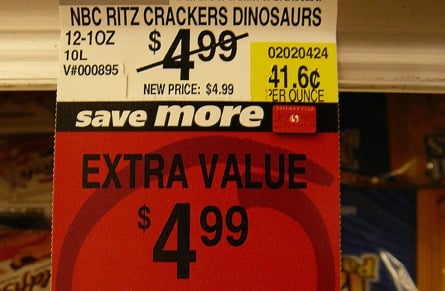 You ascend from the subway and check your phone. It tells you that you’re half a block away from an ice cream shop with a sale on single-scoops, ending in 8 minutes. You buy a cone through your phone, then pop into the store to choose a flavor. The girl behind the counter somehow knows your name.

That’s not sci-fi. It’s an app, just launched in Toronto from the group-buying site WagJag (owned by Torstar digital). WagJag Express offers users “geo-targeted” real-time deals. It uses your GPS co-ordinates to point you to bargains in your immediate vicinity. It’s a boon for merchants, who are growing weary of having to provide “deep discounts” of 50-90% to hundreds (if not thousands) of digital coupon cutters, who tend to show up and cash their chits in when it’s least convenient. Instead, local businesses can offer small handfuls of customers slight bargains at very specific times. If you’ve got a sales slump from 2:30-3:40pm, you can knock 15% off for 15 people and keep business moving. As customers track bargains through their iPhones, merchants track customers through their iPads. When I buy that ice cream cone on my smartphone, the girl behind the counter is informed of the sale on her tablet, which also tells her my name. Like I said, it’s a reality.

You emerge from the subway. You pass the same ice cream parlor, but your phone offers you no discount. It knows from your purchasing history that on hot Wednesdays like this you always buy ice cream anyhow, so there’s no need to offer you the bargain that everyone else in line is getting. Instead, you’ll be getting an offer to join Weight Watchers at a 3% discount in about 7 minutes, just as the post-ice cream guilt sets in.

Bargain services have begun offering you deals based on where you are, but how long before they also factor in who you are? If you’re trying to build a customer base, why not offer deals only to first-time customers, or super-deals to super-social customers (this is already happening with influential Twitter users)? Or if you’re looking to build a hip reputation for your business, why not offer bargains only to young customers? Why not exclude out-of-towners from deals? Everyone knows tourists will pay more, and there’s little point in building loyalty with them. If you’re a company like Torstar that also collects reading habit data on your customers, why not mash it up with their WagJag purchasing histories? Once you know both their topics of interest and their disposable income levels, you can customize deals and price points for each customer.

To be clear, WagJag Express isn’t doing these things. Yes, Wagjag knows each user’s name, age, gender and buying habits. But they don’t use this data to decide which deals to offer- not yet. In a phone chat, I suggest to Candice Faktor, Torstar digital VP and (full disclosure) a friend of mine, that merchants would probably love to fine-tune their bargains this way. Will they ever let shopkeeps get “granular” with their price tags?

“This is the first iteration,” says Candice. “This space is evolving.”