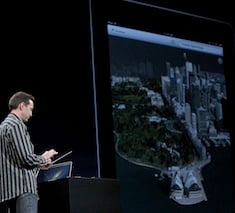 There’s a war going on for control of the world, in a figurative sense. We’re not talking about nation versus nation or a clash of ideologies (okay, on that one, maybe we are). We’re talking about Google versus Apple. More specifically, the maps that each company serves up on their respective smartphones—the applications that literally guide us around the world in our daily lives.

As almost every iPhone 5 reviewer has noted, including yours truly, Apple’s new device—which goes on sale today—is amazing in almost every way, with maps being a notable exception. For reasons no one is sure of yet, Apple has ditched Google-supplied data and is instead building its app using information supplied by GPS maker TomTom and a few other sources.

So, if you buy an iPhone 5 or new iPod that runs the latest software, iOS 6, or if you download that iOS 6 onto an older iPhone, iPod or iPad, you’ll get the new maps app. If you refrain from updating to the new software, you’ll keep the older version. For how long is another unknown.

App developers have noted that the foundation of Apple’s new maps system is actually quite good, it’s just lacking in data. As I mentioned in my review, there are some glaring omissions. The maps of Toronto, for example, show streetcar stops, but some subway stations are missing. It’s also given me faulty directions and locations on several occasions. And we all know that going to the wrong place because your GPS told you to go there is just about the worst thing ever.

Apple’s maps does have the cool 3D Flyover function that displays buildings in photo-realistic detail, but on the other hand it doesn’t have Google’s Street View. I may be lacking in imagination, but I’m not sure what practical use Flyover brings to the table. Street View, on the other hand, is very useful in getting a lay of the land for places you’ve never been.

The good news is, Apple’s new maps should get better over time, both because data is collected automatically (by cell towers) and through user feedback and input. With the zillions of iPhone 5s being sold, Apple will soon have access to a treasure trove of crowd-sourced editing. Still, Google has been doing maps and location services for years and has a big headstart. As such, on iPhone 5 launch day, Android has a big advantage in the case of maps. And it’s very unlikely that Apple will ever spend the big bucks needed to create its own version of Street View.

The questions, therefore, are: how did this happen and how long will it stay this way? In making maps take a step backward on the iPhone, who is the bad guy: Apple or Google?

Theories abound. Some believe Apple wanted to cut ties to Google, while others think Google pulled its data in order to make the iPhone and other Apple products look bad, thereby making Android phones look better.

The logic each way is a little baffling. Apple isn’t in the habit of substituting good technology with a lesser stand-in and it would be equally as strange for Google—a business built on absolute volume (it’s in the company’s frickin’ name!)—to pull its product from millions of phones simply out of spite. Neither is a smart business decision. Then again, billion-dollar patent victories have a way of adversely affecting logic.

Another piece of the puzzle comes in the form of YouTube. Apple also cut that app from the core iOS 6 update, yet Google wasted no time in making it available as a standalone app for iPhone users. Why hasn’t it done so with maps?

Again, it’s possible that Google is withholding maps in an effort to differentiate its Android phones from iPhone, but it’s equally likely that Apple may not allow such an app because it competes with a core function of its device. Apple doesn’t have its own version of YouTube, so Google is clear there, but does the company want competition on such an important part of its offering?

For Google’s part, here’s the statement a spokesperson gave me last week:

We believe Google Maps are the most comprehensive, accurate and easy-to-use maps in the world. Our goal is to make Google Maps available to everyone who wants to use it, regardless of device, browser, or operating system.

Is there meaning in that? It certainly can be interpreted a number of ways – as in Google wants to release an app, but perhaps Apple isn’t allowing it – but who really knows?

Ultimately, it all comes down to whether this is the new normal. Are Android and Apple going to start counting maps as a major differentiator between their devices, the same way that Sony and Microsoft use exclusive games (Halo versus Uncharted) to urge customers toward their consoles?

There are certainly pluses to that approach, but as anyone on the losing end of the deal would hope, it would be nice if the map competition was platform agnostic. Or at least iPhone users hope so.

In the long run, this Mapmageddon will probably be good for the world. Two powerful forces fighting it out for map supremacy is likely to mean one thing: better maps are coming.