Is Siri artificially intelligent or just a robot?

The showstopper on the iPhone 4S isn't just useful. It's clever, too.

Having just returned from a trip to New York on Sunday evening, I haven’t had much time to play with the week’s hottest new gadget —the iPhone 4S—but I have been able to formulate some initial impressions, especially in regards to its main new feature: the Siri personal assistant.

First, the basics. Yup, the iPhone 4S works as advertised. It’s faster, slicker and generally better than its predecessor, the iPhone 4. Some nifty additions to the operating system make things easier, like you can fire the thing up initially without having to connect it to your computer and you can share iTunes purchases between devices by turning on the iCloud storage option. Both options do a lot for eliminating cables and computers from the iPhone equation.

I particularly like the camera as well. The iPhone 4 had the best camera on any phone I’d tried so far and the 4S is yet another step up. Apple is continuing to strengthen the case for leaving the full camera behind and simply relying on a phone to take photos, at least in casual situations.

Much of the brouhaha over the new device, however, lies with Siri, the voice-recognition feature that can tell the user about everything from the weather to sports scores to scheduled meetings. In Canada, Siri’s capabilities are somewhat more limited for now—it can’t, for example, give directions because it is not yet programmed with Canadian maps.

I have to admit to being fairly skeptical when Apple CEO Tim Cook unveiled the feature a few weeks ago. It seemed similar to what’s already available on Android phones, which allow voice searches and other functions, while voice recognition in general is a technology that has come a long way but is still plagued by problems.

Siri is, however, remarkably accurate. Despite never having been exposed to my voice before, the tool got all sorts of proper names (mostly) correct, even if it didn’t always know the correct answer. For instance, I asked “What is Neil Gaiman’s best book?” Siri didn’t know and suggested a web search (the right answer, of course, is American Gods), but it did at least identify the author’s name correctly, albeit spelled with a “y” instead of an “i.”

The tool works well with features embedded in the iPhone, such as weather forecasts, calling up contacts, scheduling notifications and launching media. Indeed, after a few hours of playing with it, I may just be ready to say it’s more accurate than anything I’ve seen on Android. And that’s impressive, given how much effort Google has been exerting to gather voice samples.

What really got my attention over the weekend, however, was all the fun and crazy stuff people were trying with Siri, which is now being documented by various websites including “Shit That Siri Says.” Some gems from that site include people asking about—and getting funny answers on—topics ranging from boobs to Spongebob Squarepants.

That got me wondering as to the level of Siri’s artificial intelligence. It’s a loaded term that means different things to different people, so I asked Siri to define it. Here’s what I got back: 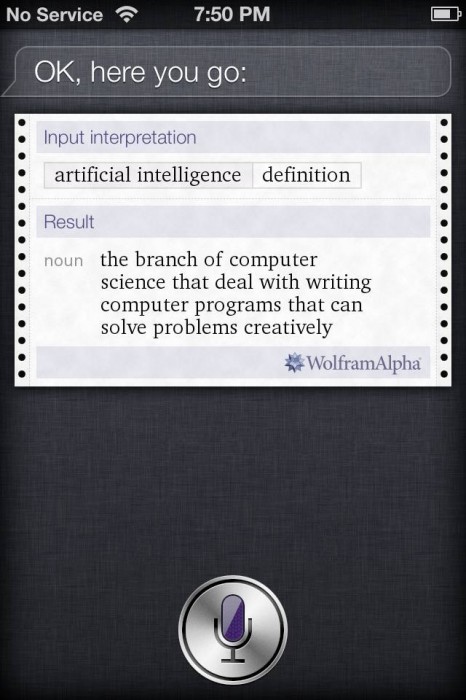 Under that definition, which is as good as any, the key to AI is the ability to creatively solve a problem. There’s no denying that Siri’s ability to recognize and translate voice plus grammar into usable data or actions qualifies. In that sense, Siri possesses what seems to be a good level of artificial intelligence.

However, with the sort of stuff showing up on the websites above, a good portion of Siri’s capabilities are likely simple programmed responses. It’s doubtful that even IBM’s Watson supercomputer, which not too long ago whupped human butt on Jeopardy, could construct such creative and funny responses as, “No comment, douche bag” to questions such as “Are you menstruating?”

In such regards, Siri is more of a programmed robot than a thinking entity. Somebody somewhere—or more likely, many people somewhere—have spent a good deal of time anticipating and then programming Siri with potential questions and their respective answers, humourous or otherwise.

None of that is meant to take away from the tool. It’s a cool little bell/whistle to have on a phone and it should be fascinating to see if it raises the stakes in this particular aspect of the smartphone war with Google.

Incidentally, where did Siri come from? The military, of course. As the video here explains, Apple’s tool started as a DARPA project called Cognitive Assistant that Learns and Organizes (CALO). If you’ve read Sex, Bombs and Burgers, that shouldn’t come as a surprise.