It's the cream of the e-reader crop 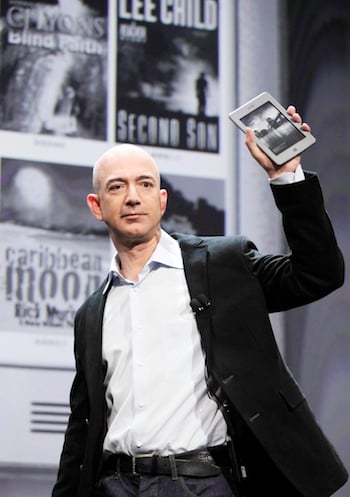 The Kindle Touch starts shipping to Canada today. Having been given a run-through of the new e-reader at Amazon’s headquarters in Seattle earlier this week, and having had the chance to put it through its paces since, this is good news for book lovers.

As its name implies, the Kindle Touch finally adds the long-missing functionality of a touch screen to Amazon’s e-reader. I’d often chuckle while watching people try to flip pages on previous Kindles by swiping the screen, only to see nothing happen. Mind you, I now sometimes have the same experience watching children swiping TV screens. How quickly the world has changed.

Anyway, other e-readers, such as the Kobo, have had touch screens for a while, so this isn’t really anything new. What I like about the Kindle Touch, though, is its “Easy Reach” feature, which makes 90 per cent of the screen an active next-page area. So, if you’re left-handed and holding the device with one hand, you don’t have to stretch your thumb all the way to the right to turn the page. You can touch the middle instead.

The remaining 10 per cent, around the edges of the screen, is for going back. Kindle director Jay Marine told me this was done because readers only rarely want to go backward in their books.

E-ink touch screens are tricky to do, he added, because they’re not as quick at refreshing as LCD tablet screens. So, if you’re looking at book cover images in the Kindle store, for example, they may take a few seconds to load. That’s why, although e-ink readers have come a long way since the original Kindle in 2007, there’s still plenty of innovation to be done.

Marine wouldn’t tell me what those ideas are, but he did note that although most existing customer concerns have by now been dealt with, that’s not how Amazon is approaching Kindle design.

“You can’t rely on customers to tell you what to go do next all of the time. You can ask them what problems they’re having but it’s not their job to invent for you.”

The Touch’s other main new innovation is a cool feature called X-Ray, which calls up a reference history for certain words in the book. So, let’s say you’ve read half the book and then stepped away from it for a few weeks, and then when you start reading again you can’t remember who the characters are. X-Ray brings up a list of mentions of that character and a synopsis of who he or she is. You then have the option to go back and reread those portions or plug onwards if your mind has been satisfactorily refreshed.

X-Ray is something of a crowd-sourced tool in that it pulls information from social book cataloging site Shelfari and Wikipedia. Marine says it’s the “dictionary of the future.”

“It makes sense because it’s knowable information. People know who the characters are, so why can’t we embed that in the book?” he said. “Once people try it, they don’t like to go back to not having it because it is super helpful.”

The other thing I like about Kindles, and not just the Touch specifically, is that most of Amazon’s e-books have real page numbers. Marine explained that the company scans and links physical books to e-books, so that the page numbers in both match regardless of the e-book’s font size. This is a feature introduced specifically for book clubs and people who need page numbers for citations. If you’re writing a book, like I am, this is tremendously helpful.

Other than that, the Kindle Touch has many of the nice specs of its predecessors. It’s super light, holds 3,000 books and reportedly has a two-month battery life. I obviously haven’t tested that claim, although as with previous Kindles, the Touch will only approach that if its wireless capabilities are turned off.

Speaking of which, the Wi-Fi-only version sells for $139 while the 3G unit goes for $189. Judging by some questions I’ve heard, there is some confusion about the 3G version. Unlike other electronics, such as tablets or portable game consoles, no separate wireless subscription is necessary with the 3G Kindle. Amazon has worked out deals with wireless carriers around the world that allow its devices to use their networks for transmitting books. 3G Kindle owners, therefore, can buy all the books they want without ever having to worry about data bills or subscriptions.

That, to me, is the Kindle’s biggest advantage over other e-readers. There’s just no beating the ability to get a book almost anywhere you are, whenever you want without having to worry about finding a Wi-Fi connection. That makes the extra $50 for the 3G version very worthwhile.

All in all, for people who prefer to read their e-books on “old-fashioned” e-ink devices rather than tablets, there’s no doubt the Kindle Touch is the cream of the crop.