Ladies and trolls of the Internet 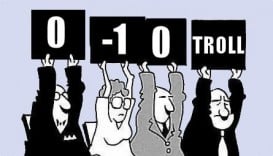 The Internet is sexist. Virulently so.

The everyday misogyny expressed on virtually every open forum is so common that it has become expected. It shouldn’t be though, and Helen Lewis-Hasteley of the New Statesman has done a fine thing by asking nine bloggers to write about the violent and hateful messages they receive daily, and how if affects them (spoiler: it’s not banal when you’re the target of it).

For readers, there’s something darkly exciting about a bunch of bloggers sharing the worst hate mail they’ve received with you—at first, that is. Reading the piece, any excitement dissolves pretty quickly: sexist trolls are repetitive, stupid, and boring. Their put-downs and sexual insults, even their threats of gang rape—all of them are terribly uncreative and tedious. The intended menace rarely registers—all that comes across is how pathetic the trolls are, how sad it is that their default reaction to disagreeing with a woman (about politics, video games, anything) is to attack her appearance and suggest that what she really needs is…

Some female bloggers ignore the comments, some read them compulsively, some even respond. All of the women who contributed to Lewis-Hasteley’s piece refuse to be dissuaded or silenced by them. This is admirable, as most of them report times when things have gone too far. The most common threat is a cowardly one—a troll will Google a blogger up and down, procure some personal information (her home address, her phone number) and then post it along with their bile. Even if they are merely posturing—and they almost always are—the information is now available to others who might not be. This is terrifying. Those who face it and continue to write what they believe (about politics, video games, whatever) while continuing to solicit feedback and commentary deserve to be called heroes.

“What can be done to reduce it? Nothing, nor would I support any moves to legislate for trolls. It’s simply the flip side to freedom of speech, we cannot have a society whereby people are not allowed to say things that could be perceived as offensive, regardless of intention. What concerns me is whether or not people might ever carry these grudges and vendettas through to real life, which is what I have been threatened with in the past. With freedom comes great responsibility.”

It is worth noting that Farrow is a right-leaning, Catholic blogger. The abuse she routinely receives, from men who self-identify as liberal, is just as sexist and sexually threatening as the rest. The men who express their political differences with women like Farrow (or Ann Coulter, or Sarah Palin) in the form of rape-threats or sexual put-downs reveal that misogyny festers on all sides of the political spectrum.

As my friend Luke has pointed out on his blog, all this toxic content does serve a purpose. It exposes the ugliness that a surprising number of men hide just beneath the surface, and reveal just as soon as they are alone in their homes, protected by the illusion of anonymity. Luke points to 4Chan founder Moot, who says that “anonymity is authenticity.”

Those of us who simply ignore their comments (which I usually do) can be seen as tolerant of them, perhaps even accepting or encouraging. That’s what needs to change- not “real names” policies, filters, or other forms of willful ignorance. Online communities need to self-police and shut these creeps up.

It’s time to feed the trolls, more than they can stomach.