Let's all freak out about 3D printed guns

Jesse Brown on why current fears are overblown 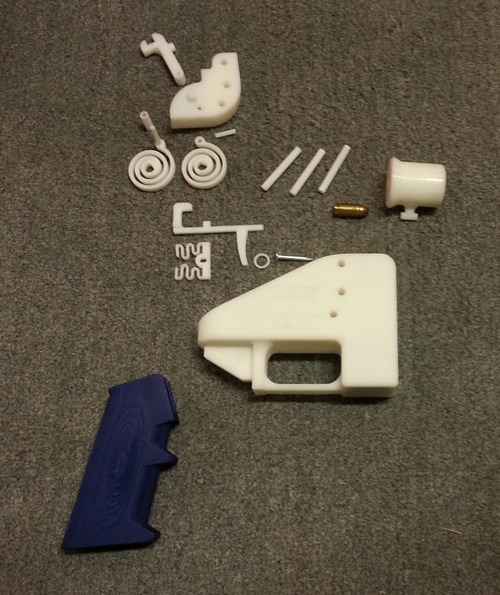 So, our horrible dystopian future has arrived, and now any nut job in their basement can download and print a handgun off the Internet.

Any nut job that is, who also owns an industrial 3D printer, priced somewhere in the $8,000-$50,000 range. Said nut job will also have to carefully assemble the gun piece by piece, as each of the 16 parts must be printed separately, a process that takes days. They’ll then have to treat the barrel with an acetone bath. Then they’ll need live ammo (the 3D gun takes just one bullet), which can’t be printed. Then they’ll have to get within three feet of their target and hope that the silly plastic pistol doesn’t explode in their hand.

Or, they could just go buy a real gun.

There’s been much hysteria about “The Liberator,” the downloadable pistol that’s just been replicated by a team at the University of Toronto. But as it stands, The Liberator is a wildly impractical weapon, more a “proof of concept” than a real firearm. Anyone with malicious intent has lots of better options. A baseball bat, for example.

I know, I know; 3D printers are getting cheaper and cheaper, the designs for these weapons will get better and better, and it’s just a matter of time before the panic is justified and it will indeed be possible for anyone to easily make an untraceable gun.

So, is it time to get ahead of the trend and enact some new laws? Not really. We already have one. It’s illegal in Canada to manufacture a firearm without a license.

The real danger here is panic itself. The Huffington Post Canada calls 3D printing a “law enforcement nightmare” and The Globe and Mail casually reports that this “new technology is on the verge of making current policing approaches obsolete.” It sounds like criticism of our cops, but the quote could have come directly from the Association of Chiefs of Police. They’re constantly pleading their own obsolescence, demanding tough new laws that give police wider powers, while eroding our civil liberties.

Of course, the police have other enforcement concerns, which the public may have less interest in and sympathy for. Namely, the mounting effort to stop Canadians from downloading content and from printing our own knock-off goods.