Yep, we reviewed the web's inventory of faux hearths. Just for you. 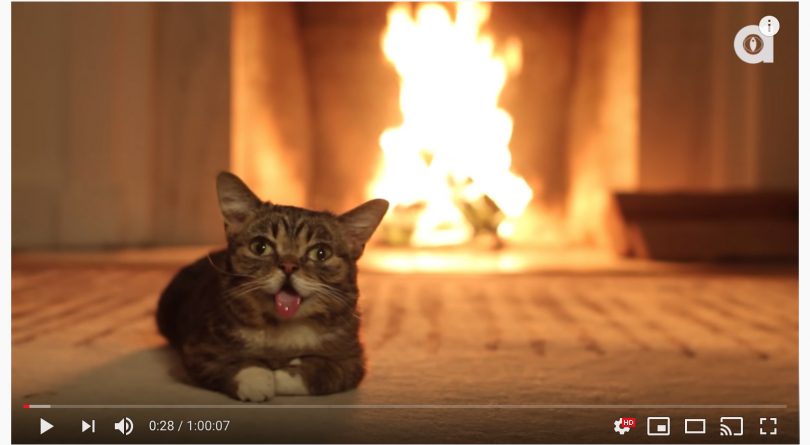 Hang shining stars on highest boughs all you want but one of the best ways to instantly up the yuletide cheer for your holiday gathering is to build a roaring fire.

Maybe the Grinch was not heartless, but rather hearth-less, and the warm glow of a fireplace was all he’d have needed to relax into the season.

If lighting anything larger than a candle is impossible or hazardous in your home, the internet has come through with a variety of options to jazz up your festive ambience on a television or computer screen.

Let us help you check one more thing off your list by offering this definitive ranking. Ratings are out of five, with one being ‘yeah, OK ‘ and five being sublime.

Look, if you’re about to host a painfully awkward family event and want an over-the-top Christmas scene with aggressive holiday music playing in the background in lieu of quiet crackling, I can’t blame you. There’s plenty of that to go around, including an hour-long Michael Bublé edition, which features an ordinary fire with his crooning Christmas album as a soundtrack. If this is your strategy, I recommend this barely tolerable video because of its bizarre details. For one thing, in lieu of poinsettias, there are tulips. For another thing, it appears to be snowing indoors.

Feeling a little gloomy? Here’s what you do. You pretend you’re in an old haunted mansion, with candles lit all around, and a creepy family portrait in the background, and a thunderstorm outside. It’s cathartic in the same way that sad love songs are after a break-up.

Why does this exist? Who knows! But the pixelated fire is strangely just as relaxing as a real one.

Lego decided to create a live 24-hour channel on YouTube that features little pieces of lego twisting around in a lego fireplace next to a lego armchair and it is pretty weird. If you watch it for long enough, a Lego Santa might come along with a plastic sack and claim a plastic thing of milk and cookies. Of the weird 24-hour fireplaces available, this one is preferable to Nickelodeon’s fresh hell, which features a steady cascade of green slime between two flames, next to a tree with Spongebob ornaments. If you watch that for long enough, the entire screen may get covered in slime! No thanks.

Rating: 2/5. If you’re really leaning into consumerism this year.

Stop motion artist PES brings us a fire that features pretzel logs and candy corn flames. It sounds like the real thing. It almost looks like the real thing if you squint. (A lot.) It’s a creative little take on the genre that deserves at least a click and a “huh.”

5. Fireplace for your home

If you want HD quality, there are several different editions of “Fireplace for your home” on Netflix that feature no surprises whatsoever, except when a preview for The Witcher automatically plays at the end. The birchwood edition is particularly nice because it has birchwood. (However, there’s some trickster at the streaming platform who wants you to feel very bad. Unless you’re looking to troll all of your guests, do not—do not—choose “A Home Fireplace: Bright Edition.” It is neither bright nor at a home. To a background of sirens, it features a multicoloured oil drum in a graffitied alleyway that, over the course of an hour, gets visited by bad CGI gremlins and helicopter searchlights.)

4. Campfire by the lake

Put this one on for your one friend who likes to go into the forest by himself to think about life. The friend who likes telling stories about staring out at the water in communion with a frog. There’s also a campfire by the river, although it’s admittedly a bit confusing to hear birdsong and crackling fire at the same time.

May he rest in peace. The tiny cat of internet fame just chills out throughout this video, purring and making cute little breathing sounds and letting his little eyelids get heavy. Lil Bub reportedly died in early December, so if you have any affection for the pets behind the memes this might be a little sad.

Watch as a very good boy munches on a bone then settles in for a nice long nap in front of a warm fire. Meditate as the soft belly rises and falls, and the wrinkly nose smushes into the cozy blanket.

Find me a whisky drinker who does not want to sit silently with Nick Offerman with a wee dram of Lagavulin scotch while enjoying the warm glow of a yule log in a wood-paneled room. Watch as Nick Offerman spends 45 silent minutes sitting comfortably in a brown leather arm chair. Watch as Nick Offerman slowly goes to take a sip, and then sometimes just puts the glass back down instead. What a sly fellow! (Someone made a 10-hour edition.)