Making faces in front of your webcam? Could be the future of the Internet

Back when I was working on my chatbot story for New Scientist magazine, futurist and Chatbots.org founder Erwin Van Lun shared with me some fascinating prediction for the future of the Internet. With anonymity enabling such things as annoying comments on news stories at one extreme and chatbot scams and terrorism organization at the other, Van Lun believes we’re moving toward a world where everyone will have to prove their identity to get on the Internet in the first place.

“Governments are responsible for citizens and issue them passports to travel the world, they should also say ‘we are responsible for your behaviour on the Internet, so we will issue you an Internet passport’, ” he says. “That’s where it’s heading to.”

It’s an intriguing premise that is sure to rile free speech advocates – and to be sure, there are many good reasons to preserve online anonymity – but it does look like things are heading that way. YouTube, a cesspool of anonymous troll commentary, was just the latest recently to make the move toward using real names. 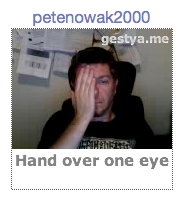 As my story outlined, current technology designed to verify identity – such as those squiggly CAPTCHA images sometimes seen during log-ins – is flawed because it can be easily circumvented. Something new and considerably more advanced will be needed if an Internet passport were to become reality.

Jeremy Wyn-Harris, an entrepreneur in New Zealand, thinks he might have part of the answer with Gestya, a video tool that requires users to perform gestures in order to sign in. The gestures are captured via the computer’s webcam and if they match the pre-progammed set, the user is in. The movements can be anything from “flapping your wings,” to climbing a ladder to holding a hand over your eye, as I’m doing in the photo on the left.

Wyn-Harris calls it “challenge validation” that current or even near-term robot technology can’t match. And because it’s video, it’s also a great way for proving that the user is who they say they are: “Gestya video clips can’t be faked as Gestya requires each user to respond appropriately to the unpredictable performance challenges in real-time.”

The technology, which was born out of Wyn-Harris’s desire to keep his kids safe online, could be used for log-ins to sites, contracts and account security. Those are all good reasons to require identity validation online, but do they outweigh the negatives?