McAfee, Vice, and the limits of hipster journalism 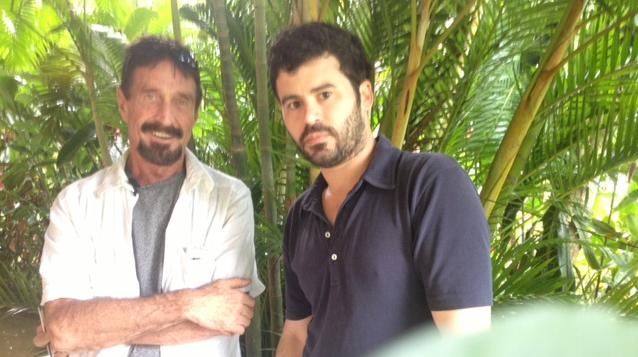 “QUITE FRANKLY WE DON’T KNOW WHAT THE FUCK IS GOING ON.”

On Monday, Vice posted a story titled “WE ARE WITH JOHN MCAFEE RIGHT NOW, SUCKERS.” It was a middle-finger pointed not just at their own readers, but at any rival media source following, from a distance, the curious case of the fugitive anti-virus software king (since apprehended). As proof of their coup, Vice included a photo of editor-in-chief Rocco Castoro, posing gangsta tough next to a weirdly laid-back John McAfee. The message: the world is looking for this guy, but we’re actually hanging out with him, and we’re not telling you where. But they did, by accident. The photo included meta-data revealing their precise location, which a reader quickly pinpointed as “next to the pool at Nana Juana Hotel Marina and Yacht Club” in Guatemala. McAfee was soon arrested. Oops.

It was a pretty big boner to pull, but what came next was worse. Before his arrest, McAfee claimed that the geotag data was wrong, that it had been deliberately altered to throw authorities off his trail. Vice backed him up, even as they re-posted the pic with the metadata scrubbed.

McAfee has since admitted, on his own blog, that this was a lie.  He blamed the geodata leak on “an unseasoned technician at Vice headquarters” and called the lie about it a necessary “misdirection.” Then he apologized, which is more than what Vice has done.

Rather than take any responsibility, Vice responded with a hipster shrug and a sleazy tease. Though he indeed might not know what the fuck is going on, editor Rocco Castoro still assures readers that he’s having an “absolutely epic” experience.  He’s been “blown away” by it, and “in the coming weeks, once we wrap up our documentary and corresponding magazine piece, you will find out exactly what that means.”

Give the man a Pulitzer.

These days, Vice wants more than anything to be taken seriously. And they are; they have a partnership with CNN and are launching a 24-hour news channel in 18 countries.

As a ballsy antidote to all that is fake and pompous in TV news, Vice’s foray into journalism can seem exciting. It’s fine that they don’t truck with any of the news business’s self-important window dressing. This is an unregulated trade, far from a profession, and Vice is free to do whatever they like and call it journalism. They can accidentally rat out their own subject, become part of the story they are covering, lie about what they did and what they know even as they pimp out a promise that they know much more.   It’s all good showbiz, and they have our attention. What they lack is credibility.