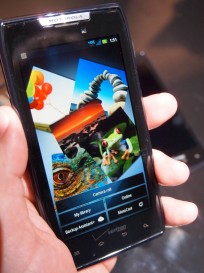 As many had speculated, Motorola has indeed dusted off the old Razr name for its new smartphone, unveiled here in New York Tuesday. In the U.S., where the handset maker has licensing rights with the Star Wars folks, the phone actually combines two of Motorola’s most successful brands—it’s called the Droid Razr. For the rest of the world, including Canada, it’s just the Razr.

What I found most interesting during Motorola chief executive Sanjay Jha’s presentation was the mention of how the Razr will be aimed at corporate customers as well as the every-day consumer. The device can accommodate secure enterprise email systems and has remote wipe capabilities, which means it’ll probably pass muster with many businesses’ IT departments.

This has bearing on Canada, particularly BlackBerry-maker Research In Motion, which counts business users as its main bread and butter. RIM’s recent woes have been well documented here and elsewhere, but its problem ultimately comes down to this very factor: it is much easier for consumer-facing companies such as Motorola to delve into the business world than it is to go the other way, which is what RIM has been trying and failing to do for some time now.

I asked Jha about this afterward and he agreed to an extent, although he isn’t taking RIM lightly. The BlackBerry maker, which was coincidentally showing off its upcoming BBX operating system at a developer conference in San Francisco, is still a very strong competitor, he said:

There is something at the gut level that resonates with consumers about Android, and we know it because we’ve tried something like three or four OSes. To win in this business, the only learning for me so far is that there is not just one factor that gets you a win. It’s a combination of multiple factors that gets you there. It’s not just cheap, it’s not just the best, you have to hit the appropriate [spots]. They have to do that and it’s work in front of them. Can they do it? Absolutely, it has been done before and it can be done again.

Motorola Canada president Michelle Digulla also acknowledged RIM’s position, but she was a bit more specific in the opportunity for her company:

At the beginning it was the CTOs saying here are the three phones you can pick from or that you can use. That whole dynamic is completely changing. People are like, ‘No, no, no, I’ll pick the phone, you just make it work.’ To be honest, iPhone really pushed the envelope for enterprise people to start doing that. We need to start educating the market about Android for business. It’s an uphill battle, especially in Canada where people are entrenched with RIM, but this is exactly what we need to take hold of.

As I put it on Twitter, Motorola’s hip and cool phones (i.e. the Droid and the original Razr before it) seem to be almost the antithesis of business devices, where staid, sturdy and reliable are the watch words. Motorola could therefore have as much of a tough time getting accepted within companies as RIM is having in the consumer space. The difference, however, is that all the momentum is coming from the much bigger consumer market. It’s obvious which side any handset maker would rather be on.

Motorola will likely benefit greatly in this regard once it is absorbed by Google, a topic that Jha also discussed. More on that in tomorrow’s post.