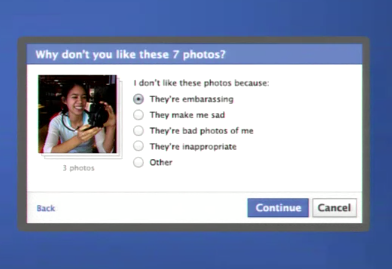 "They reveal my nipple" is not an option

Facebook users are ignorant. I should know, I am one.

I’m ignorant of who can see my status updates. I’m murky on the privacy settings of my photos. I don’t have a clue how many app developers I’ve let into my data. I’ve lost the plot, like everyone.

Events in recent months have revealed just how ignorant, and distrustful, we all are of Facebook. First we confused our own old promiscuous posts for a Facebook privacy leak (it wasn’t). Then we suddenly realized that maybe we weren’t OK with Facebook having control of all our content, so we spread around a magical incantation that we hoped would undo our TOS contracts (it didn’t). It’s often said that if Facebook were a country, it would be the third most populated country in the world. It might also be the world’s dumbest country, with citizens who have no idea whether they exist in an anarchic utopia or a totalitarian surveillance state.

You might argue that Facebook benefits from our ignorance, that if we knew just how public our data is and how little control we have over the company’s ability to exploit it, we would have never signed up. But it’s too late. One billion of us did sign up, and now Facebook has rightly set out to educate us on just where we stand.

Today, Facebook introduces new, easier to use privacy settings, and an educational campaign to make us all less ignorant. This is a good thing.

Whereas privacy controls were once hidden under the hood and scattered in different parts of Facebook, the updated controls let users quickly see who will have access to their content. Often, this information will be disturbing. For example, many users think removing a post from their timeline or untagging themselves from a photo means removing the content from Facebook entirely. It doesn’t. The informaiton is still online, via search or on other users’ news feeds, and now Facebook will tell you so. If you do want something removed completely, Facebook now gives you an option, other than “reporting” it to Facebook.

Facebook now presents users with an easy, automated takedown request form that is sent to the author of the unwanted content. Instead of demanding that Facebook remove your cousin Larry’s photos of you because they’re “abusive,” you can ask Larry nicely to take then down himself, because “They make me sad” or  because “They’re bad photos of me.”

Another substantive change has to do with third-party apps.  Before, apps would only ask for permission to post to your Timeline when you installed them — a moment where users may be more excited to find out what kind of sandal they are than to soberly consider their privacy. Now, apps will have to also ask you for permission right before they post on your behalf.

The changes will be rolled out to Canadian Facebook users between December 21-28. It’s a step in the right direction.