Our 2016 Newsmakers: Have Elon Musk’s visionary ideas gotten ahead of his ability to deliver? Don’t bet on it. 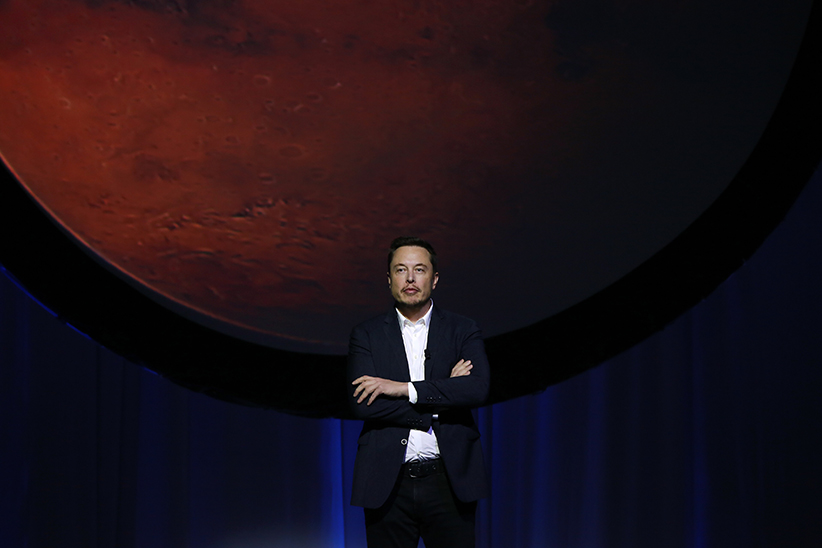 Our annual Newsmakers issue highlights the year’s highlights, lowlights, major moments and most important people. Read our Newsmakers 2016 stories here, and read on to see why Elon Musk made the list as one of our seven Newsmakers of the Year.

Visionary entrepreneurs are expected to have their heads in the clouds. But Elon Musk’s is often on another planet. He founded electric carmaker Tesla Motors 13 years ago with the daunting but sensible goal of weaning the world off climate-altering fossil fuels. He launched the private rocket ship company SpaceX in a bid to make space travel cheaper and, one day, colonize Mars—a proposition that suddenly sounds more attractive now that Donald Trump’s been elected U.S. president.

Recently, however, several of Musk’s high-flying projects appear at risk of being dragged back to Earth. In early September, a SpaceX rocket exploded on the launch pad at Cape Canaveral as it was being pumped full of fuel. The sole fatality was an Israeli-built satellite, but the accident nevertheless raised questions about SpaceX’s mad dash into the solar system—particularly since it plans to use the same rocket, the Falcon 9, to ferry crews to the International Space Station in a few years (SpaceX has in the past supplied the ISS and successfully landed a Falcon 9 back on Earth so it can be reused). Musk, in an apparent effort to downplay the incident, wrote on Twitter that it was more “fast fire” than an explosion, although the distinction may have been lost among the astronaut community.

At Tesla, Musk’s life has been similarly lively. The carmaker continues to grapple with fallout from a fatal Florida crash of a Model S sedan after both the driver and the car’s “autopilot” system failed to detect a white tractor-trailer against a “brightly lit sky.” Critics also tore into the carmaker for leading customers to believe Tesla’s cars were self-driving when they’re not—at least not yet. On the business side, Tesla is also struggling to meet lofty expectations. It made a huge splash in March when it unveiled its much-anticipated Model 3 car with a price tag of just $35,000 before government rebates. But critics question whether Tesla can build the necessary 500,000 vehicles a year by 2018 (about five times what it builds today) given that it’s so far failed to meet any of its launch targets. Investors, meanwhile, aren’t thrilled with Tesla’s plan to pay US$2.6 billion for solar panel installer SolarCity, run by Musk’s cousin, lest it distract Musk from the missions at hand.

There’s no question Musk has bitten off a lot of rocket-grade aluminum. But it still seems unwise to bet against him. Time and again, he’s demonstrated a knack for transforming the far-fetched into the seemingly doable. Take Hyperloop: In 2013, Musk unveiled his vision of a revolutionary, if somewhat retro-looking, new transport system that would whisk people through tubes at speeds approaching 1,200 km/h, and challenged others to run with the concept. Three years later, a firm called Hyperloop One successfully tested a propulsion system in a Nevada desert and is now contemplating a link between Abu Dhabi and Dubai that would take just 12 minutes.

Musk’s future plans are even more ambitious: to send a probe to Mars in two years and follow it up with a manned mission within the next decade. He outlined the bold plan during a September keynote speech at the International Astronautical Congress in Mexico, where he showed off a video of SpaceX’s proposed Interplanetary Transport System—a giant spaceship lifted into orbit on a skyscraper-sized rocket. Musk’s ultimate goal? Build a self-sustaining colony of one million people on the Red Planet, thereby giving humanity a chance to survive an “extinction event” back here on Earth.

Such talk has a funny way of making the odd rocketry mishap, let alone a few missed factory deadlines, fade rather quickly into the blackness of space.