Not everyone in the industry supports Starlight, the proposed Canadian film channel

Starlight is a proposed TV channel dedicated exclusively to Canadian film. It’s owned by producer Robert Lantos and two partners, and has the support of a veritable who’s who of Canadian filmmaking. As the CRTC considers Starlight’s application for a “mandatory carriage” license, Lantos has been making passionate pleas to the public to support his cultural undertaking, and the media has been largely sympathetic.

George Burger is not. Burger, a film industry veteran, is now a partner in VMedia, a small Toronto startup offering TV subscribers cheap, largely unbundled channel packages over IPTV (Internet Protocol Television). The CRTC is supposedly encouraging cable, satellite, and IPTV providers to break up channel packages and offer more ” a la carte” choice, and VMedia has emerged to do so and thus compete with Videotron, Bell, Shaw and Rogers. VMedia has filed an intervention with the CRTC against Starlight and other proposed mandatory carriage channels.  [Note: Maclean’s is owned by Rogers Communications, which has also filed an intervention against Starlight’s proposal.]

George Burger spoke with me this week from his Toronto office.

What’s your objection to a channel dedicated to Canadian film?

I don’t have an objection at all. I think it’s a terrific idea. What I object to is the Canadian public taking on all the risk, while the principals get all the benefit. They have no skin in the game. They would have an easy time getting a “category A” license (which would make the channel available to viewers, but not mandatory -ed). They don’t appear to be confident about that.

Robert Lantos says this will cost Canadians just a few cents a day.  You have a different figure.

Overall you’d be looking at probably about $775 million gross out of the public’s pockets over the seven year license. 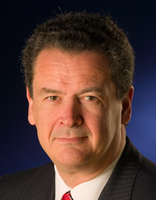 So you see this as yet another public subsidy for Canadian film.

Look, for the last 40 years, well-intentioned bureaucrats and regulators have been trying to get Canadian-made films to catch fire with the Canadian public. No matter their targets, box office market share for English-language Canadian film resolutely clings to 2-2.7 per cent. We need a cold, clinical analysis of the value for money of all this initiative.

Lantos and his partners say that’s because there’s nowhere for people to see Canadian movies. They get made, but people can’t watch them…

…and if they were just made available, we’d watch more of them. It’s a false argument. Over 10,000 hours of Canadian films are already available on TV each year. It’s not exactly the Sahara desert of Canadian film. But every time we talk about how acclaimed our films are, we always get back to the same four or five titles. There’s something wrong with this picture.

Starlight isn’t just proposing to show Canadian movies, they’re promising to make them. They say they’ll put 70 per cent of their revenues back into original productions.

It’s easy to say that when it’s not your money that you’re committing. Why not 90 per cent? If you started up a charity, you don’t pat yourself on the back for spending most of the money people donate to you. But there’s more–once those movies are made, they’ll be owned by Starlight!

How exactly would the granting of this license hurt VMedia, your Internet TV startup?

VMedia’s business model is based on our ability to maximize choice and flexibility for Canadian viewers. We provide conventional TV service plus equal access to OTT (over the top) Internet services like Netflix and Google Movies that traditional broadcasters are not going to promote or make seamless for their customers, because it makes it easy to leave their content. So we’ve been negotiating maximum flexibility from channel suppliers.

Yes, as much as possible. If we offer bundles, it’s not by our choice.

So every new channel granted mandatory carriage compromises your ability to do so.

That’s right, I have to increase my infrastructure and my basic channel pricing.

Isn’t your argument against “mandatory carriage” as a whole, and not with this specific channel?

I look at mandatory carriage as a privilege unto itself. To be asking that subscribers have to pay for these channels in addition is quite a stretch. There are lots of channels that would give their eye teeth to be carried on basic for free, because that’s 12 million homes you’re in automatically. It’s like being put on the middle shelf of every supermarket in Canada.

But what they want is more than great placement–it’s a forced purchase.

Yes, this is the only industry where Canadian consumers are actually obliged to purchase something. The fact is, as a matter of policy, the CRTC wants to keep people in the broadcasting universe as opposed to losing them to the Internet world. Does anyone believe that jamming more channels at us is going to do that?  It’s going to send viewers to the exits.