The most expensive burger in history

Kate Lunau on the ethics and implications of lab-grown meat 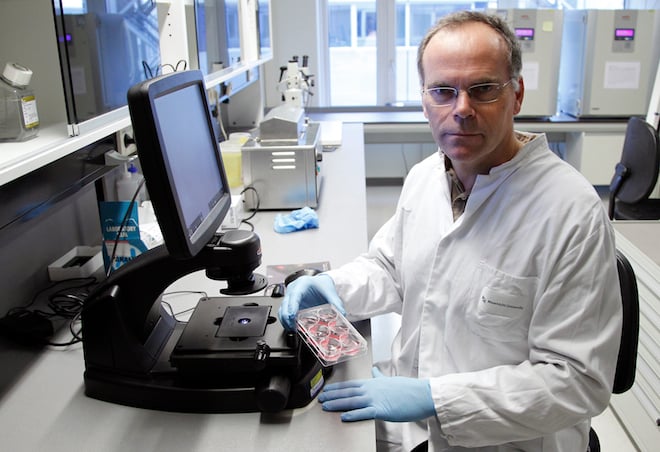 Scientist Dr. Mark Post poses with samples of in-vitro meat in a laboratory, at the University of Maastricht in the Netherlands on November 9, 2011. (Francois Lenoir/Reuters)

As long weekend revelers across Canada throw steaks and sausages on the grill, Dr. Mark Post was cooking up something different: a hamburger made of animal stem cells, grown in his lab at Maastricht University in the Netherlands.

The one little five-ounce patty took him years to perfect, at a cost of 300,000 euros, or more than $409,500 (donated by an anonymous investor), making it what must be the most expensive and labour-intensive sandwich patty in history. Some doubted it could be done. As the burger was unveiled in London—then bitten, chewed, swallowed and consumed, for all the world to see—Post’s burger was redefining “meat” as we know it. This is the food of the future.

Post, a medical doctor, has been attempting to create tissues in the lab for almost a decade. The applications are huge: engineered human tissues could be used to test drugs, for example, or to treat many diseases where the body wastes away.

To Post, the “food application” started out as an interesting side project, one that soon stole the spotlight from his other work. Meat for consumption is “in theory, much easier to grow,” he told Maclean’s in an interview in 2012. “The tissue does not need to physically integrate into the body. I considered it a closer goal to reach,” he says, “and a very important one.”

Indeed, the global appetite for meat is growing.

Livestock production already takes up 30 per cent of the land surface on our planet, says a 2006 United Nations report, producing more greenhouse gas emissions than all our cars and trucks, combined. According to Patrick O. Brown of Stanford University, eating one four-ounce hamburger is the equivalent of leaving a bathroom faucet running round-the-clock for a week. Developing nations are increasingly emulating the meat-heavy Western diet, and it isn’t sustainable. “We are heading towards a meat shortage worldwide,” Post says. Instead of producing beef, pork and poultry on massive industrial farms, in the near future, he predicts, we’ll be growing it in factories. And while this first hamburger was incredibly expensive to make, as techniques are perfected and lab-grown stem-cell burgers can be mass-produced, the cost will go down; one day it could be lower than the price of traditionally raised meat, which is expected to rise.

Of course, growing a minced hamburger patty—let alone a dense, fat-marbled steak—isn’t a simple task. Post and his team harvested stem cells from a cow’s muscle tissue, and bathed them in a special formula of nutrients. As these cells start to differentiate into muscle cells, they’re hooked to attachment points (Post has used Velcro) to create tiny strips of tissue, like a tendon. Eventually, they start to contract on their own. “The downside for animal lovers is that you still need animals,” a donor herd to provide stem cells, Post says. But compared to factory farming today, the number would be very small. If we grew all our meat in a lab, Post believes, the number of livestock worldwide could be reduced by a factor of one million—the equivalent of reducing 10 billion livestock animals on the planet to 10,000. This would free up land, water, and other resources, while making sure remaining livestock didn’t “suffer a death fraught with the issues of large-scale slaughter.”

Other than Post, only a handful of scientists are working on lab-grown meat; others believe the future lies in plant-based substitutes, ones so good they could fool even the most discerning palate, although Post maintains that we humans will always have an appetite for the real thing.

“Worldwide, the meat-eater population is going to grow. There’s no doubt about that,” he says.

Post’s hamburger is a powerful proof of concept, an important first step. Now we must unravel the implications of this one burger—for science, for health care, and for the food supply that feeds everyone on the planet.