Outer space is the 'next resource frontier,' says CEO of asteroid mining firm

Once the stuff of science fiction novels, asteroid mining could soon become a reality 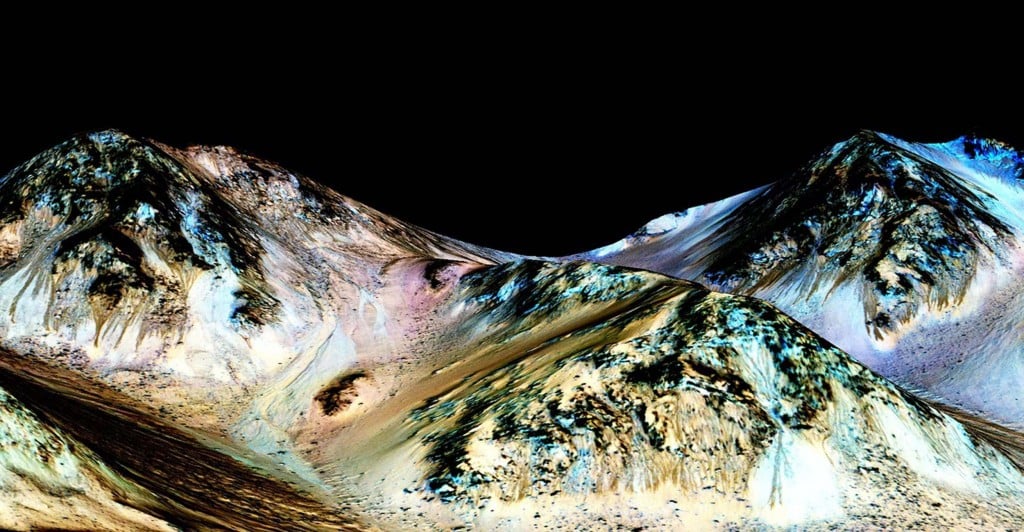 Dark, narrow streaks on Martian slopes such as these at Hale Crater are inferred to be formed by seasonal flow of water on contemporary Mars. (University of Arizona/NASA/CP)

TORONTO – When humans set out to colonize other planets, they’re going to need resources to build their settlements.

That’s the pitch Chris Lewicki, the president and CEO of a U.S. asteroid mining company, delivered Monday at the annual Prospectors and Developers Association of Canada conference in Toronto.

Related: Get to know the great unknown with Maclean’s Space Issue, guest-edited by Chris Hadfield

Shipping raw materials from Earth into space would be an expensive endeavour, says Lewicki, the head of Planetary Resources, who pegs the cost of sending water into orbit at $10 million per tonne.

“In order for them to do that sustainably, and to do that indefinitely, they’re going to need to use resources they can find nearby,” Lewicki said.

Once the stuff of science fiction novels, asteroid mining could soon become a reality, says Lewicki.

“This is something that is going from theoretical to practical,” he said. “The next resource frontier is outer space.”

Planetary Resources has already begun testing technologies that could be used to extract metals such as iron, nickel and cobalt from resource-rich asteroids close to Earth. The Redmond, Wash.-based company deployed its first spacecraft last July and plans to launch another one this year.

The A6, as it’s called, will have an imaging system that can measure temperature differences of the various objects it encounters, as well as gather data relating to the presence of water.

Planetary Resources expects to start extracting water from nearby asteroids by the early 2020s.

Water is important not only to human life but also to industries, Lewicki says. It can also be broken down into its components — oxygen and hydrogen.

The concept of tapping asteroids for resources is so novel that there are few regulations determining who has a right to the harvested materials.

The U.S. recently signed a law that legalizes commercial asteroid mining and deems any resource extracted from a space rock the property of whoever mined it. No such law exists in Canada.

While regulations are often blasted for stymying progress, Lewicki says rules will be necessary as the space mining industry takes off.

“We often talk about the challenge of regulations,” Lewicki says. “But regulations create an important framework.”

Lewicki says there are a number of existing models that could be used to determine asteroid jurisdiction. Countries could lay claim to specific asteroids, lease the land or apply for the rights to harvest minerals.

“The only thing that is new about the industry of asteroid mining is it doesn’t happen within what we are familiar with as the national territory of any country, and that’s the item that the United States has taken the first step on,” Lewicki said.

“Maybe we’ll see the beginning of the national federation of planets start out of this.”