Aaron Swartz was charged under a 1984 Internet law 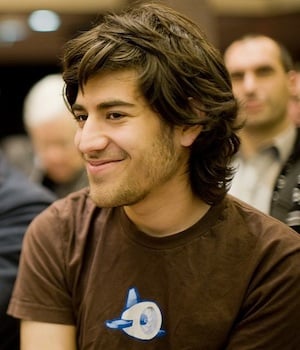 And now the curious case of 25 year-old Aaron Swartz.

By any measure, he is a brilliant kid. He co-wrote the specs for RSS 1.0 (really simple syndication) when he was 14. When he hit 20, Swartz sold Reddit, the social news site he co-founded, to Condé Naste for some small fortune, and then dedicated himself to non-profit work for the public good.

His philanthropy didn’t involve gala fundraisers. Swartz became an aggressive activist, an agitator, and depending on your view of things, a data radical.

One major project was Demand Progress, his PAC (political action committee). The group pioneered online activism tactics and was a major player in the successful campaign against SOPA and PIPA, proposed legislation that would have curbed civil rights online. But this isn’t what got Aaron Swartz into trouble.

Somewhere along the way he began using data analysis research to track corruption. He crunched a data set of over 400,000 law review articles to determine the source of their funding.  This led to a fellowship at the Harvard Ethics Center Lab on Institutional Corruption. That gave him access to MIT’s libraries, which in turn had access to JSTOR, a non-profit online database of journal articles.

Aaron Swartz allegedly set out to liberate these articles. JSTOR might be a non-profit, but using it costs money. It has a massive trove of searchable, high-quality peer-reviewed academic work that it separates from the public with a paywall.

Swartz is accused of writing a program that began automatically scraping JSTOR’s 38 million pages of text, one at a time, and dumping them onto a removal hard drive hooked up to an Acer laptop that Swartz allegedly hid in an MIT library closet. He allegedly returned to the library periodically to switch full hard drives with empty ones, covering his face with his bike helmet as he passed surveillance cameras.

Why might he have done this? Swartz has a history of acting as a sort of data Robin Hood. In 2009 PACER, a walled database of public court documents, was made available for free at 17 public libraries. Access to it would have normally cost 8 cents a page. Swartz installed a scraper app that sent the pages directly to the cloud, where they were released into the wild, free for anyone to access. When I asked him about it in an interview, he told me that “it’s our job for those of us on the outside to keep pushing… and showing how important it is to get things on the web”.

The FBI investigated Swartz for releasing the PACER documents, but pressed no charges. He hasn’t been so lucky with the JSTOR data. He now faces 13 felony charges—9 were laid last year, and an additional 4 just last week. He could spend decades in prison, and face fines of up to $1 million. Some of the charges have to do with the damage he supposedly did to MIT’s servers, but others seem far more quotidian. Swartz is accused of using a false email address, a made-up guest login name, and violating JSTOR’s clickable terms of service agreement. How are these infractions considered felonies?  Because of the 1984 Computer Fraud and Abuse Act, a law crafted well before the Internet was in common use, which was intended to provide stiff penalties for those who hacked into corporate or government systems to steal data or destroy them.

A federal appeals court found that if the the CFAA was applied to things like violations of website’s terms of service agreements, then  “millions of unsuspecting individuals would find that they are engaging in criminal conduct.”  It ruled that these kinds of cases were better left to civil courts. But this ruling only covers certain States in the west. In Massachusetts, where Swartz is accused of ignoring JSTOR’s terms, clicking “I agree” without reading and obeying could land you in a Federal prison, a convicted felon.

Swartz pleaded not guilty to the original charges and has promised to do the same with regards to the new felonies. His activism, it seems, will now move on to challenging the validity of an almost 30 year old computer law that makes criminals out of anyone who has ever used a fake name on a website, and which threatens his own freedom.