Remember UBB? This is worse. 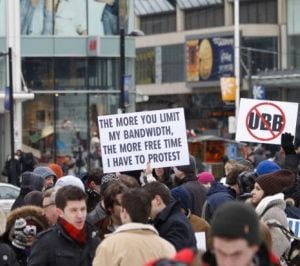 It’s 8 p.m. on a Wednesday in the Joe Blow household. Mom’s in the living room, watching a Netflix movie in HD. Dad’s making a video Skype call in his office. And Joe Jr. is playing World of Warcraft in the basement. The Blows are decent, law-abiding and bandwidth-thrifty folks. Piracy is not tolerated, and all screens are off by 10 p.m. They’ve never exceeded their monthly bandwidth cap.

So how much should they expect to pay for their Internet? According to George Burger, a veteran telecom executive currently advising the independent ISP TekSavvy, mainstream use like that could soon cost upwards of $150 a month.

That’s what’s to come in the post-UBB Canada, says Burger. This may come as a bummer to the 100,000+ Canadians who were active against Usage Based Billing, and who thought they had won. When the CRTC ditched Usage Based Billing for a capacity-based pricing model, it seemed to many onlookers (myself included) that reason had won.

Despite years of claims to the contrary from infrastructure owners like Bell, Videotron and Rogers, there is all but no difference in fixed costs when a user downloads, say, 500 gigabytes instead of five. Charging indie consumers arbitrarily and overage fees on a per gig basis outraged thousands of Canadians–it seemed like a bald ploy to suppress competition and preserve Canada’s overpriced Internet access oligopoly.

The CRTC made the right move in forcing a capacity-based billing model. Capacity is what’s limited—the zeroes and ones are free. During Internet “prime-time” on weeknights, Canadians are most likely to jam the network with data-intensive applications like video streaming. The sudden, simultaneous usage doesn’t cost anything extra to the big ISPs per se, but it slows down speeds overall, necessitating regular upgrades to the infrastructure itself. It’s fair to pass some of that cost along to the third party ISPs who must rent space on the big boys’ networks.

But at what price?

Here’s where the CRTC messed up. It let the big ISPs name their own prices, and has failed to check these figures aganst reality. Ideally, independent engineers would take an objective look at a provider’s technology and investments and come up with a price tag that reflects these costs. Instead, each provider conjured up a different, seemingly arbitrary number for the CRTC. The submission process was sealed, meaning that Bell and Videotron couldn’t see each other’s homework when telling the CRTC what their capacity was worth.

The result is wild variations in capacity costs. For example, Cogeco says their wholesale capacity cost is $26.95 per customer, while MTS Allstream says it costs $2.81 per customer. The CRTC accepted these submissions at face value and issued them as part of the UBB decision.

It gets downright comical: now that the low-ballers have seen what their competitors are getting away with, they are asking to hike-up the original figures they submitted. Today is the deadline for them to make their cases, and each is citing different “technological” reasons for the change. Each ISP tells a different, woeful tale about how they underestimated things and suddenly realize they need to charge much more than initially thought.

When it’s all said and done, Canadians may be in worse shape than they were under UBB. Before, only so-called “bandwidth hogs” had to worry about monstrously huge Internet bills. With capacity-based billing, which might be better described as “take our word for it-based billing,” customers may soon be paying through the nose because they’re using popular, mainstream Internet applications at the wrong time of the day.

According to George Burger, that’s simply not an environment where competition can exist.