A USB that let's you escape prying eyes and geoblocking 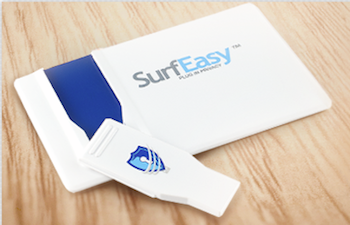 One of the things I always try to do at the Consumer Electronics Show is take stock of the Canadian companies at the annual Las Vegas techno-circus. Aside from BlackBerry maker Research In Motion, that usually means talking to startups.

At this year’s show, one of the more interesting startups I encountered was SurfEasy, a new Toronto-based outfit aiming to make web surfing more private through a USB key that plugs in to your computer. The company recently started shipping its product and I finally had a chance to review it.

The best part of the SurfEasy key is just that – it’s easy. It’s a thin USB stick that comes in a plastic credit-card-like holder. You plug it in and it immediately launches a quick registration window, where you input your email address and a password. From there, a brief tutorial shows you how to use it and then you’re off to the races.

The SurfEasy browser is based on Mozilla, so it looks and feels similar to Firefox. A blue panel on the top right tells you that the site you’re on is encrypted. All of the browser’s traffic flows through a virtual private network connection to SurfEasy with the same level of security encryption as banks use, according to the company. That means no one – not your ISP, Google or the government – can snoop on what you’re doing. Indeed, the Google search bar shows up on SurfEasy’s default home page, but it can only track your location by city rather than by your individual IP address. Even that level of identification can be turned off, if you choose.

The idea behind SurfEasy is that it’s supposed to keep your browsing completely private and personal. This can be accomplished with most regular web browsers by going into “private” mode, where cookies and history are not recorded, but the difference with SurfEasy is that such information is tracked and stored on the USB key, which means you can take it with you and use it on different computers. Simply press the “Quit SurfEasy” button on the top right, unplug the USB key and move along.

Another recently introduced feature that’s really nifty is the on-screen keyboard, designed to foil keyloggers. If you’re in an Internet cafe, for example, and are worried that some no-gooder has installed key-logging software on the computer you’re using, you can click a button on the browser to bring up the virtual keyboard on screen. Using the mouse, you can then enter your password without worrying that it’ll be stored.

At $60, SurfEasy is thus a very useful and inexpensive tool for people who are protective of their privacy and computer usage. But wait! It gets even better.

Since the browser connects to a VPN it also bypasses firewalls, which is music to the ears of people who are blocked from certain websites (like Facebook) at work. Of course, if your employer does block such sites, your IT department certainly won’t be happy if you pop the SurfEasy key into your computer. If you’re going to use it at work, you might not want to tell anyone.

More importantly, SurfEasy’s servers are located in the U.S.. Translation: goodbye geoblocking. Last year, my Maclean’s colleague Jesse Brown put together a list of all the great U.S. websites and services that Canadians want but can’t access because of licensing issues and the like. So naturally, one of the first things I did with SurfEasy was head over to Hulu, the free TV streaming website that’s at the top of that list. I nearly wept tears of joy as, instead of getting that horrible message telling me it’s not available in my country, the shows streamed freely.

SurfEasy doesn’t promote this particular bonus of its service and, realistically speaking, it may last only as long as the company manages to fly under the radar of the entertainment giants. In the meantime, SurfEasy may just be the easiest and cheapest way to bypass U.S. geoblocking. The stick itself sells on the company’s website and comes with 2 gigabytes per month of encrypted use. According to SurfEasy’s estimates, that amounts to 45 hours of web browsing or four hours of video streaming per week.

The company also sells premium plans – $5 a month gets an additional 25 GB, while $10 gets 75 GB – in case you really want to max out that ungeoblocked video streaming. And secure surfing, of course.