It doesn’t do much that’s new, but it does do a lot--and well 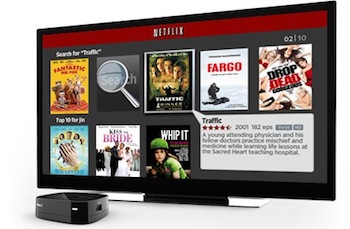 Last week I wrote about the upcoming arrival of Roku in Canada on Apr. 30. I’ve had a chance to play with the Internet streaming device for a few days, so here’s my review.

At first, I was skeptical. With so many devices already connected to my TV, I wasn’t sure Roku would provide much in the way of new. Indeed it doesn’t. Most of its “channels” are basically apps that can be streamed to your TV in other ways, but it does put a lot of stuff in one place with a nice, simple user interface.

Roku isn’t like other media devices, such as the Apple TV, PlayStation 3 or Xbox 360, as it’s not intended to sell movie or television episodes. Instead, it’s meant to stream much of what the Internet has to offer.

One of the first channels I installed and launched was Flickr, so that I could see what my recent wedding photos looked like on a TV. In many cases, the channels require you to first authorize Roku on your computer through the app’s website. So if you load Rdio, for example, Roku directs you to the music streaming service’s website, where you punch in a code. From there, Roku automatically launches the service. Simple enough. Flickr and my photos, by the way, worked and looked great.

Roku is launching in Canada with around 100 channels, with promises to quickly grow that closer to the 450 that U.S. users currently get. Even with fewer channels (for now), there’s still plenty on offer.

The real-time news channels from the Wall Street Journal and CNBC host high-definition video, so it’s almost like getting a free CNN replacement. Facebook, Flickr, Weather Underground, recipe channels and various internet radio stations are all there at no cost as well.

Indeed, many of the channels on Roku are free, but it’s also easy to spend a bundle through it. You have to punch in your credit card details when activating the device, in case you want to buy any of the paid apps, most of which are games–more on that in a second. Many of the channels, however, only work if you’re a paid subscriber. Netflix, one of Roku’s most popular channels, is of course a paid subscription service.

The only channel I had problems with was Facebook, where I kept getting error messages. I checked with Roku to see if this was a common issue, but apparently not–it might be an issue with my unit or account. On the plus side, having tried Facebook on my TV through other devices, it’s probably not something I’d want to use the Roku for anyway.

The slightly higher-end Roku 2 XS, the one I tested, comes with a Nintendo Wii-like motion remote control for playing games. Playing Angry Birds on a big screen with a motion controller (which you could already do if you have a Wii) as opposed to a touch screen is pretty cool. I didn’t try any of the other games, mostly because I’m a cheapskate and didn’t want to spend money on downloading them. There are a bunch, though, including game shows such as Wheel of Fortune and Jeopardy!

Roku doesn’t technically have the ability to stream media from a computer, which in this day and age seems backward. Fortunately, there’s a free downloadable channels that allows for streaming from a USB key. You can thus copy music, photos and videos from a computer onto a stick and plug it into the device. The only issue I found with this app is that it’s incapable of playing the popular .avi video file format. With any luck, this will be fixed either through updates or by additional channel apps.

Roku is ultimately a curious device. It has some limitations and doesn’t do much that’s new, but it does do a lot–and it does it well. With a low price–the Roku  HD is only $89 while Roku 2 XS is $109–it’s a worthwhile pick-up for anyone who does a lot of web surfing, or for people who want to get entertainment on their TV without having to subscribe to cable or satellite. However, if you’ve already got a ton of other streaming devices under your TV, you’re probably already covered.