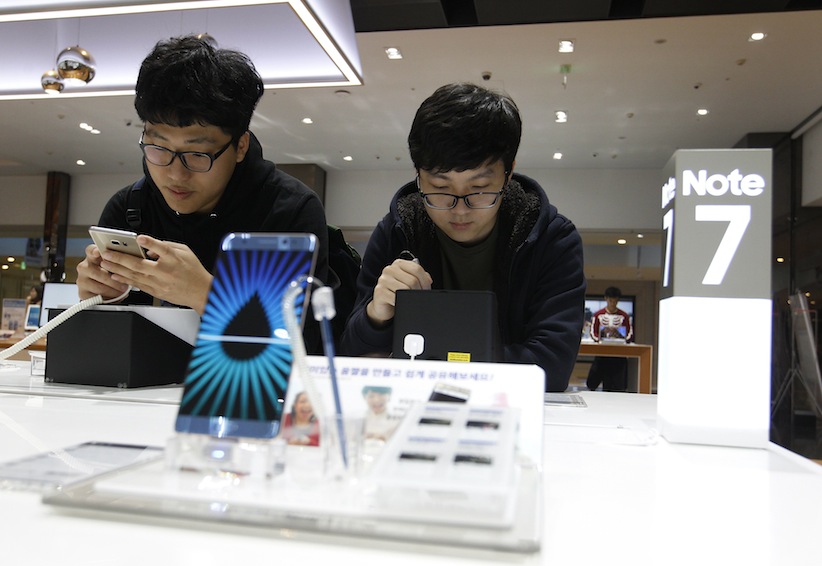 MISSISSAUGA, Ont. – An Ottawa man who received a replacement Galaxy Note 7 smartphone on Tuesday morning says he plans to keep using it despite a notice from manufacturer Samsung that it was halting sales after reports of fires in both original and exchange models.

Samsung Canada issued a statement late Monday asking all retail outlets to stop sales and exchanges of the Galaxy Note 7 while the investigation is taking place.

The company, based in Mississauga, Ont., says Canadian consumers with either an original Galaxy Note 7 or replacement Galaxy Note 7 device should power down and stop using the device.

But Marc Stevens of Ottawa said he needs his phone too much and will likely “risk it” given the low likelihood of his phone bursting into flames.

“It’s just too handy. I love the pen, I love the features that come with it like the iris recognition. I can get into my phone a lot faster than I used to with password protection,” he said.

He added he’s kept a close watch on his original Galaxy Note 7 since getting it through his employer in August and has experienced no overheating issues.

Stevens said he filled out a form on the Samsung Canada website requesting an exchange about 10 days ago and his new phone was delivered on Tuesday morning. He was transferring data from the old phone to the new when he heard that Samsung was now recommending that both versions be shut down.

Donna Ramirez, a spokeswoman for Vancouver-based Telus Corp. (TSX:T), said Tuesday the company has halted all sales of the Galaxy Note 7 and is working on a refund or exchange process for customers. Details are to be announced when available.

Rogers Communications (TSX:RCI.B) spokesman Andrew Garas said customers can get a refund or exchange their Galaxy Note 7 for “a comparable in-market device” at the store where they purchased it.

South Korean safety authorities have said they found a possible new product defect in the new Galaxy Note 7 that may not be related to its batteries.

One of the safety officials said they have no idea when they would identify what caused the newer Galaxy Note 7 smartphones to catch fire.

Last month, Samsung said a tiny manufacturing error in the battery was to be blamed for the fires.

Transport Canada issued an advisory in September that airplane passengers and crew keep their Galaxy Note 7 smartphones in the cabin, not in checked baggage, because of the fire risk.

It also recommended against using or charging the devices in the aircraft.