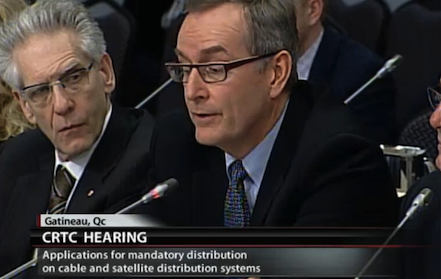 Last week, the titans of Canadian cinema joined forces to make their case for a mandatory all-Canadian movie channel that they would own collectively: Robert Lantos, David Cronenberg, Paul Gross, Deepa Mehta, Denys Arcand, Guy Maddin and more — the gang was all there. Each took a turn to present the case in favour of forcing Starlight channel onto every Canadian cable and satellite subscriber’s TV, and obligating each of us to pay for it. Lantos called film “the highest achievement of mass culture.” Cronenberg said our movies “represent the high-water mark in Canadian creative and cultural expression.”

I love movies, too. Who doesn’t? But what they had to say is worth repeating:

As self-important (and perhaps, delusional) as the directors were, I believe they were well-intentioned.   And yet producer Robert Lantos, the majority partner in Starlight, said things to the CRTC and to the press that do not seem to match what Starlight said in its official application.

Starlight wants more money from Canadians per year than we give to Telefilm Canada. Unlike Telefilm, Starlight is a private company, and we’ll have no way to hold it accountable once it gets a licence (the CRTC doesn’t audit the books of TV channels).  The CRTC and the public have one chance to scrutinize what Lantos and Co. are proposing to do with our money during the next seven years.

I think it’s crucial to hold them to account while we can.

Here’s what Lantos told my Maclean’s colleague Brian D. Johnson, when presented with the criticism that Starlight wants not only to show Canadian movies, but also to make them, using public funds to finance a private movie studio:

“There is no studio model. Calling it a studio is inaccurate.”

Yet here’s what the Starlight application says:

“… the (Starlight) Fund will operate as a ‘mini-studio’ and will receive and evaluate proposals in the same way that successful studios do.”

The chief concern with this studio model is that Starlight would own and exploit the films it makes with public money as any movie studio or distributor would, assuming none of the risk while reaping the rewards. Lantos verbally denied this last week to the CRTC and earlier to Macleans:

“Starlight will not own, produce or distribute films. The copyright will be owned by the producer.”

Yet here’s what the Starlight application says:

“The (Starlight) Fund will take a majority equity position in the film(s) and will organize the exploitation of the film(s) through the normal theatrical, home video, and broadcast windows.”

— Paragraph 99 of their supplementary brief.

There are other financial questions about the budget line items in Starlight’s proposal:

In their intervention to Starlight’s application, George Burger and VMedia dropped this cheeky bombshell: should the CRTC deny Starlight its mandatory carriage licence, VMedia will develop and release a Canadian Movie app to deliver the rich history of Canadian cinema to anyone who wants it for $1.99 a month.

Meanwhile, the NFB has announced that in 2014 it will launch a subscription streaming video service, a Netflix of documentaries with a library of films made throughout the globe.  Both projects hint at a different future for Canadian film—one that’s accountable to an audience and to the marketplace, and one in step with where viewers are actually going: away from linear broadcast TV, and toward the Internet.  It may be worth mentioning that neither of these projects will cost Canadians $700+ million dollars.

Robert Lantos is an old hand at the CanCon game, and he’s tapped some big names to help paint a CRTC regulatory decision as a tribunal on the future of Canadian cinema and Canadian culture.

This, it is not.  Funding Lantos’ private movie studio is not the same thing as funding the arts.  Canadians and the CRTC should proceed with caution. Early signs are, they will.  As CRTC Chairman Jean-Pierre Blaise put it to the Starlight crew, “you are in the business of illusions. We are in business of regulating.”