SOPA, a U.S. bill that could "break the Internet" 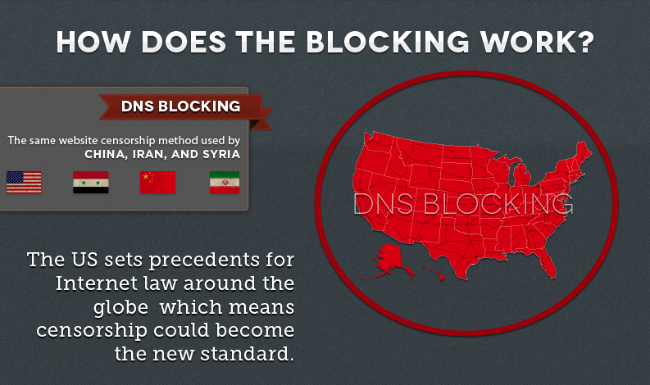 By now you may have heard of SOPA–the Stop Online Piracy Act–an anti-infringement bill that’s working it’s way through the U.S. House of Representatives while its companion bill PIPA–Protect Intellectual Property Act–makes its way through the Senate. Opposition to the legislation has gone viral, with over a million emails hitting Congress, carrying the phrase “Don’t Break the Internet.”

These people’s beef? There are many. A tentative summary: Critics argue that, in their desire to curb piracy, SOPA and PIPA will in effect render the Internet itself legally untenable by holding search engines, ISPs and user-generated content sites responsible for other people’s piracy. The proposed legislation targets not just infringers, but anyone suspected of being associated with them–advertisers, payment sites, even those who just link to them. With their shaky understanding of technology, the bills will potentially result in entire websites (like say, Wikipedia) being blocked due to infringements found in a small section of them. Though the bills were not designed to be censorship legislation, censorship could be the outcome, as false positives and false infringement claims could block access to millions of non-infringing sites. Before things even get to that stage, self-censorship will chill voices online that simply can’t risk possibly transgressing the bills’ overly general language. Meanwhile, censorship-circumvention tools like TOR, used to evade Net-censors in Iran and China, will be rendered illegal, as such tools can also be used to gain access to pirated content.

The effects of SOPA and PIPA will be felt throughout the world, as the way the bill defines “U.S. websites” is so broad as to cover most of the Internet itself. The list of collateral damage the bills are feared to cause goes on, and the list of the bills’ critics keeps expanding. In addition to the million+ citizens who have spoken out, the legislation is also opposed by tech companies such as Google, Yahoo!, Facebook, Twitter, Reddit, AOL, LinkedIn, eBay, Mozilla, Wikimedia, and, yes, even Microsoft.

Here’s what people are saying about SOPA and PIPA:

“The definitions written in the bill are so broad that any U.S. consumer who uses a website overseas immediately gives the U.S. jurisdiction the power to potentially take action against it.”
-Art Bordsky of Public Knowledge

“It’ll have a stifling effect on venture capital. No one would invest because of the legal liability.”
-Internet entrepreneur Lukas Biewald, founder of Crowdflower

“This is just another case of Congress doing the bidding of powerful lobbyists—in this case, Hollywood and the music industry, among others.”
–Fortune Magazine

“…this would mean the end of the Internet as we know it.”
-Rep. Zoe Lofgren (D-CA)

“This bill cannot be fixed; it must be killed.”
– The Electronic Frontier Foundation