Opinion: Tech advances should prompt government to radically increase efficiency and effectiveness of programs and services

By Sunil Johal, the University of Toronto November 30, 2017 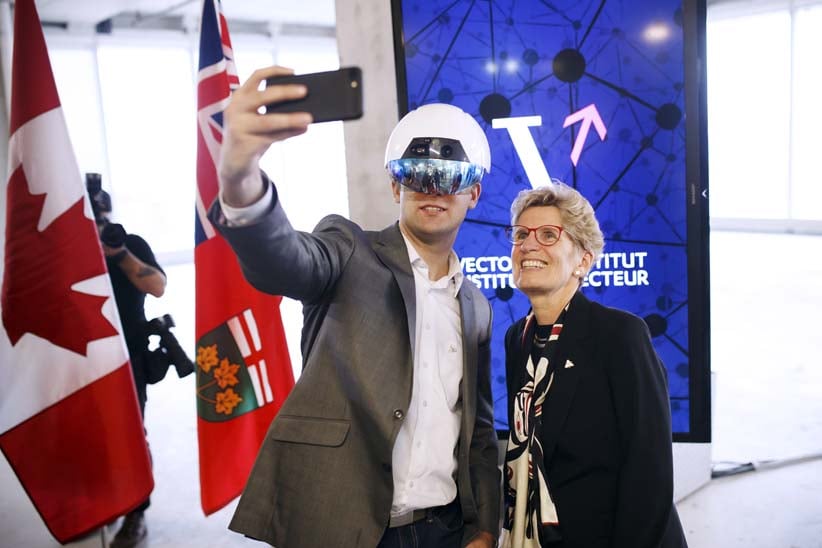 Kathleen Wynne, premier of Ontario, right, poses for a selfie photograph with a man wearing a virtual reality (VR) helmet in the Vector Institute at the MaRS Discovery District in Toronto, Ontario, Canada, on Thursday, March 30, 2017. (Cole Burston/Bloomberg/Getty Images)

Sunil Johal is policy director of the Mowat Centre at the University of Toronto. This piece was first published at The Conversation.

Artificial intelligence is the hot topic of the moment.

The most valuable firms in the world, including Amazon, Microsoft and Google, are in a race to hire leading AI researchers to advance their efforts on autonomous vehicles, medical diagnostics and a range of other ventures.

At the same time, governments are rushing to support the technology that might drive the next economic paradigm shift with funding and incentives.

Prime Minister Justin Trudeau spoke to the promise of AI at a conference recently, where he focused on the opportunity for Canada to attract investment and create jobs in the burgeoning field.

But are governments inadvertently laying the groundwork for their own irrelevance?

As policy director at the University of Toronto’s Mowat Centre, I focus on the impacts of technology on the labour market, government services and social programs.

Already today, the private sector is deploying cutting-edge technology as soon as practicable while the public sector struggles to implement turn-of-the-century solutions to seemingly straightforward tasks.

The federal government’s ongoing travails with the Phoenix pay system upgrade, which was designed to save $70 million a year but instead may cost $1 billion to fix, is just the latest example of public sector challenges with large-scale information technology projects.

And the gap between the two worlds is likely to only get wider as technology — whether AI or blockchain — becomes more advanced, complex and disruptive. The private sector’s capacity and ability to work with IT is already higher than the government’s. As salaries and opportunities continue to draw talent to the private sector, we’ll likely see a corresponding increase in the capability gap between the two.

Citizens, increasingly accustomed to living and working digitally, are only going to have higher expectations for government’s technological adeptness and capability in the future.

Banks, retailers, manufacturing firms and mines are all transforming themselves into digital organizations.

If our governments remain rooted in the industrial age, their decline in relevance is only likely to accelerate. Most government structures and processes date back earlier than the 1950s.

This relevance gap won’t just be about accessing services more easily and effectively. In the near future we will likely see a debate about why public sector employees are relatively immune to job disruptions and precarious work conditions, while technology could accelerate both trends for those in the private sector.

As job quality continues to erode in the private sector, the public sector will appear to be apart from trends in precarious work. This will likely lead private sector workers to question why their taxes are funding well-paying, secure positions while they themselves may be struggling mightily. 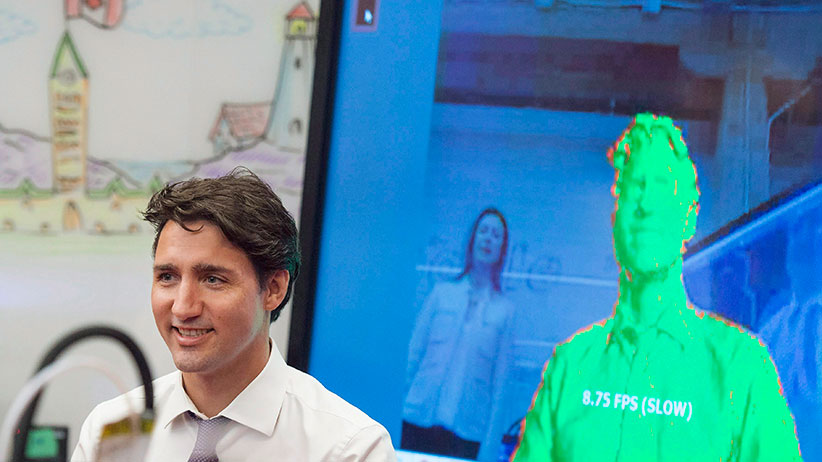 The future of work for many in the private sector will increasingly involve jumping from gig to part-time role and back again to make ends meet, with little left over to save for retirement or for “benefits” such as mental health services or prescription medications, labour market trends over the past 30 to 40 years suggest.

Those employment trends are likely to get even worse due to technology and corporate strategies.

In 2014, the public sector unionization rate was 71.3 per cent — nearly five times the private-sector rate of 15.2 per cent, which raises hard questions about who will speak up for the private sector worker in an increasingly lean and fissured labour market.

A 2016 study by Deloitte and Oxford University found that up to 850,000 jobs in the United Kingdom’s public sector could be lost as a result of automation by 2030, in administrative roles as well as jobs for teachers and police officers.

Merely applying these same projections to the Canadian public sector would mean over 500,000 jobs at risk out of 3.6 million public sector roles. But collective agreements could impede any attempts to pivot away from employees performing routine administrative tasks and towards workers with digital skills.

RELATED: Too much innovation talk can be a bad thing

If the economy at large continues to wring efficiencies out of human labour and substitute technological approaches where possible, it becomes hard to imagine the public sector trundling along as it always has.

Quite simply, the public sector will need to develop a more efficient workforce and adopt more agile structures and strategies in order to maintain relevance in a digital world.

So, what’s the right path forward? While it’s promising to see governments and other public sector organizations move forward with digital service agendas, we can’t expect them to simply overlay digital solutions onto existing processes and reap the real benefits of technology.

The public sector, ranging from the core civil service to health care to education, must fundamentally transform how it operates.

Do we need countless contribution agreements, contracts and reimbursements to be physically vetted by clerks in multiple offices when blockchain technology could instantly verify all of those same transactions?

Do policy units need 30 advisers to prepare advice for government ministers, or can much of their work be done automatically with a select few adding high-value insights? Can we employ telepresence to reach students in remote communities with high-quality teachers? Will medical diagnostics be transformed by neural networks that can more accurately detect cancers and other diseases?

Countries like Estonia, widely regarded as the most advanced digital society in the world, demonstrate that it’s possible to rethink government as a digital platform.

Whether and how quickly Canada’s public sector can leverage technological advancements to radically increase the efficiency and effectiveness of programs and services will be perhaps its greatest challenge in the years to come.

Delays and missteps will only continue to put the public service further behind mainstream business and consumer trends, and risk a continued decline in relevance for our public institutions.

FILED UNDER: artificial intelligence The Conversation