The computer as modern art

Jobs didn’t just sell Macs and iPods, he made beautiful objects—a revolutionary idea in his industry

When Steve Jobs introduced the iPod in 2001, he did something that would have been counterintuitive for any other consumer-product company CEO: he showed the back of it first. “I’m in love with it,” he said of the elegant, shiny surface reflecting the Apple logo in matte relief. “It’s stainless steel; it’s really, really durable. It’s beautiful.” By then Apple devotees expected such attention to detail from the man in the black mock turtleneck who took computers from geek to chic—the imperative was embedded in his company’s very DNA.

In his 2009 TED lecture talk about inspirational leadership, Simon Sinek observed that Apple challenged the status quo and expressed its ability to think differently precisely by making products that are consistently “beautifully designed, simple to use and user friendly.” And certainly the public’s appetite for innovative, human products is reflected in consumers’ willingness to pay a premium for Apple products. But Jobs’s greatest design legacy was reframing its parameters in the mass market. As he told the New York Times in 2003, Apple didn’t see design as product veneer: “That’s not what we think design is. It’s not just what it looks and feels like. Design is how it works.”

The iPod, coveted to the point of theft, exemplified Apple’s fusion of function and form: the technology was revolutionary (“You can put your entire playlist in your pocket,” Jobs boasted), yet every user touch point was carefully considered to be familiar and seem pleasing—its gift-like packaging, playing-card proportions, intuitive scroll wheel, even the tiny clip that prevented its distinctive white earbuds cord from tangling when it was packed up. The Museum of Modern Art put an iPod in its collection and extols the device for raising expectations for all consumer products—and also “stimulating manufacturers to recognize the importance of good design and to incorporate design considerations at the highest levels of their corporate structures.”

Designers bow before Apple’s thoughtful, minimalist aesthetic: “Every aspect is considered—the ergonomics, the feel, the touch,” says Toronto industrial designer David Didur. “The magic is the technology.” New York-based designer Peter Buchanan-Smith lauds Apple for “technology that feels designed by human beings.” He recalls his wonder over the touch-activated zoom feature of the iPhone introduced in 2007. “It was like a child turning on the tap for the first time.” 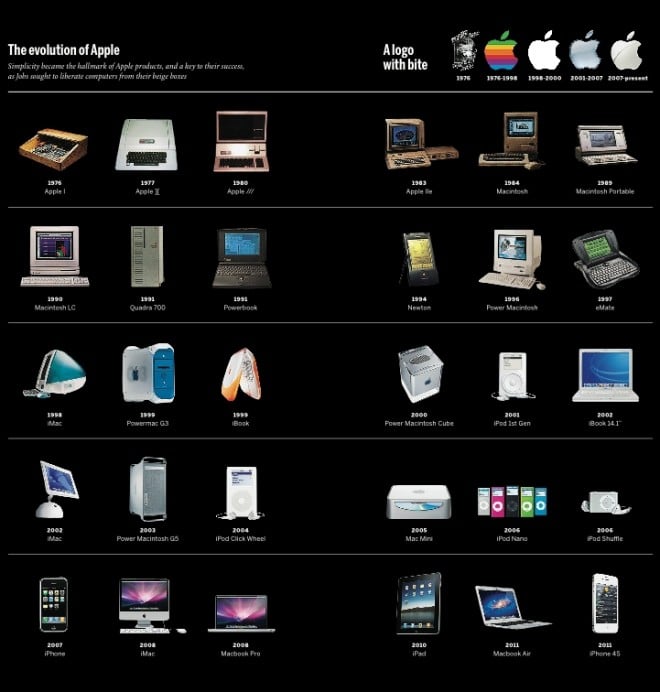 Apple’s design enabled design, says New York City art director, designer and typographer Steve Heller. “It changed our way of living. Before the Mac, I did everything by hand.” Paris-based designer Jean François Porchez of Typofonderie believes the Mac, with its black-type-on-white screen, multiple typefaces and proportionately spaced fonts (all Jobs’s directives), ushered in a design revolution: “In terms of democratizing design it was every bit as significant as Gutenberg’s invention of the printing press,” he says. Buchanan-Smith, who teaches design, sees the Mac’s innovations as double-edged: “You have instantaneous access to publish and design and do whatever you want. But it’s so easy to go from A to Z without much struggle. You don’t want to struggle with a tool, but you want some creative struggle.”

“Steve always had a high standard for design and how things should look—far more than most heads of companies manufacturing things,” says Chicago designer Rob Janoff, who, in 1977 created Apple’s logo. Janoff recalls Jobs showing up at his Silicon Valley advertising agency with the plastic Apple II, the company’s first computer. “He was proud that it looked like it belonged in a kitchen, like a food processor.” Jobs wanted a friendly logo, he says: “He wanted kids to respond to it and to get it into schools.” Janoff’s hand-drawn apple (made universally identifiable with a bite removed) rendered in colourful stripes won approval in its first draft, he says.

That was unusual, given Jobs’s renowned micromanaging of every step of the design process; his name appears on more than 300 patents, from the iPad to the supports used for the glass stairs in Apple stores. Jobs always presented himself as an exemplar, not originator. “We have always been shameless about stealing great ideas,” he admitted in the documentary Triumph of the Nerds. Apple didn’t invent the mouse, that was Xerox, but it made its use intuitive. Its magnetic plug on computers was used on deep fryers first; Apple just made it sleeker. And the company’s aesthetic under Jonathan Ive, head of Apple’s design group since 1986, owes a huge debt to Dieter Rams’s design in the 1960s for Braun electronics and appliances. But it was Jobs’s radical vision to liberate computers from programmers and their beige boxes—literally with the candy-hued iMac, his first design win after returning to Apple in 1997. Many followed: titanium and aluminum iBooks, even sleeker MacBook Air envelopes, the huggable iPad that emerged as the must-have accessory at Paris fashion week.

In a 2006 Newsweek interview, Jobs compared Apple’s design process to peeling an onion: “Most people stop with the first solution, which is complex,” he said. “But if you keep going, and live with the problem and peel more layers of the onion off, you can oftentimes arrive at some very elegant and simple solutions. Most people just don’t put in the time or energy to get there. We believe that customers are smart, and want objects which are well thought through.”

Such simplicity is the most difficult thing to achieve in design, says Porchez. “It’s a difficult decision to say you refuse some functionality for the user, but it’s for his own benefit.” Didur cites Apple as a yardstick: “I use Apple when talking to corporate clients as an example of the fact that considered design sells, and that it’s worth the investment in research and development.”

That’s evident in the affection elicited by Apple products. Heller balks when asked to name his favourite: “It’s like asking ‘Which one of your children do you like the best?’ ” It’s a mystique the company guards carefully, says Janoff, who’s often asked to speak about the logo, which has been modified slightly over the years. When he tried to track down the designers to credit them, he hit a wall, which doesn’t surprise him: “Part of the genius of someone like Steve is they have to think it’s totally their show.”

How that show will continue without Jobs is unknown. But there was no greater tribute to his design legacy than a link claiming to be leaked specs for the iPhone 5 that went viral months before his death. It depicted a fantastical, improbable holographic keyboard and laser special effects—and proved to be bogus. But the fact so many people thought it possible is testament to Jobs’s genius for bringing the world beautiful objects that reinvented technology and, more, inspired human wonder.