The day the Net stood still 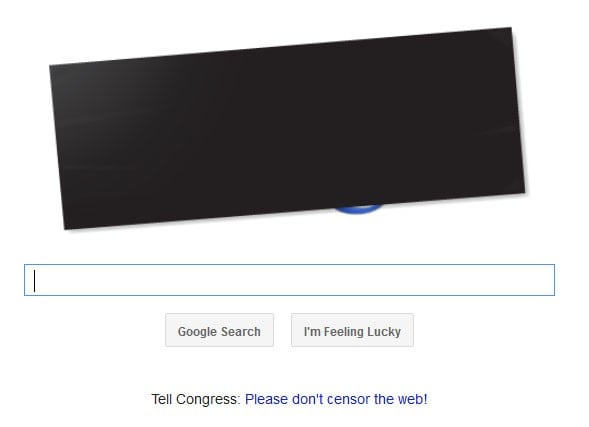 Yesterday’s SOPA protest changed everything or nothing, depending on who you ask.

Wikipedia went dark, as did Reddit and many smaller sites.  Google stayed live, but presented U.S. visitors with the above–a chilling break from the usual whimsical “Google Doodle.”  Hundreds of millions of people who knew little about SOPA, learned of it.  Lawmakers got the message, and many withdrew their support for the ham-fisted and technologically illiterate anti-piracy law. The bill itself may not be completely dead, but it’s pretty damn close.  Beyond the direct issue at hand, many regarded the event as a watershed in American politics.  SOPA-critic Congresswoman Zoe Lofgren said:

“This is an important moment in the Capitol. Too often, legislation is about competing business interests. This is way beyond that. This is individual citizens rising up.”

On the other hand, maybe nothing changed at all. The Obama administration had already publicly trashed SOPA, and the bill’s chances were shaky at best. The disappearance of Wikipedia for a day led to many jokes about factually incorrect homework assignments, but we all somehow got by. And sure, millions of people signed petitions or changed their Twitter picture, but such “slacktivism” is easily dismissed–what’s a disgruntled mouse click worth, anyhow?

It can be worth plenty–plenty of money, and plenty of votes.  The SOPA backlash was nothing less than America’s digital spring. The Internet flexed its muscle, and Washington flinched.  The people now know what a little slacktivism can do, and so do their representatives.