The future is virtual? Nope. 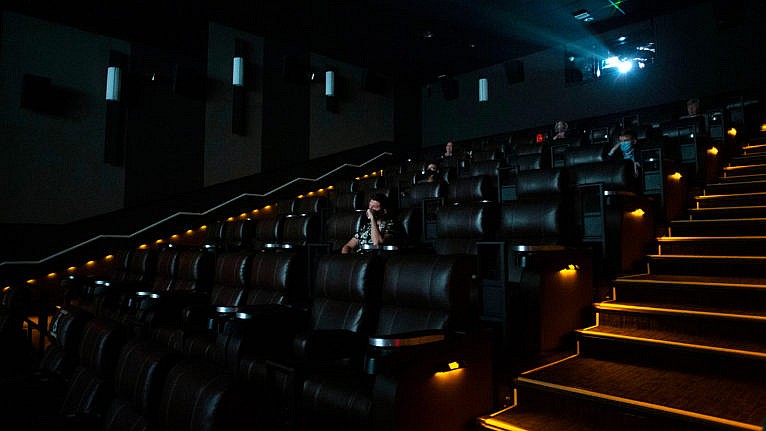 Moviegoers at a theatre in October; turns out home streaming can’t replicate the experience (Chris Young/CP)

Return with us now to a simpler time, a time when the future seemed clean and elegant and drawn in straight lines at right angles. Back to January 2020, to be precise, when the U.S. business magazine Inc. published a column from Justin Bariso with the headline: “Netflix killed Blockbuster Video. The movie theatre is next.”

There followed several hundred words of techno-utopianism built on the fact that it’s cheaper to watch movies at home than in a theatre. Well then: “The question is, as streaming services get more competitive, and consumers have more content options than ever, will they continue to pay more to go to brick-and-mortar movie theatres?”

Now we have our answer, and all it took was seven months away from movie theatres to see it. It turns out there’s more to a movie-viewing experience than bandwidth and home-popped popcorn. Even a perfectly ordinary suburban multiplex offers an immersive experience, a date night, a family bonding moment, a memory you can’t approximate at home.

The failure of home streaming to replicate the cinema experience is so total that most movie studios don’t dare release their surprisingly limited stock of audience-ready blockbusters to streaming services. The streaming revenue model can’t cover the cost of making big movies. What was intuitively obvious became the actual smell of burning money when a couple of films, such as Christopher Nolan’s time-travel caper Tenet, were dumped into socially distanced quarter-capacity theatres and promptly lost most of their production costs.

Multiply this lesson across big parts of the economy, and then extend it beyond the merely economic into the less tangible realms of human experience: in more ways than we would have thought to count, you actually need to be there. The future was never supposed to be virtual. We are social animals. Our essence can’t be poured through wires. When this long night ends, the ability to get together and go places and do things won’t be a small reward for patience and sacrifice. It will be a return to who we are.

For decades, techno-utopians have been predicting that online learning would destroy universities. Who would pay big money to uproot their lives and colonize a little fake village of lecture halls when they could stay home and watch the lectures on a screen? Now there is probably somebody in your own family who’s been catapulted, all unwilling, into this massively online future—and who’d give anything to go back to lectures and study groups and, depending on their personality, maybe a little beer pong.

It’s not merely that the online world of Zoom calls was nowhere near ready for its spotlight turn when the lockdown came, though anyone who’s stared at an endlessly frozen laptop screen waiting for bandwidth to unclog knows those lost moments are never coming back. It’s that the virtual world, even when it functions correctly, transmits such a tiny slice of real human interaction and real society.

The virtual world distributes its favours unevenly. Millions can’t do their work on a Zoom call, from carpenters to ballerinas, and the online option is disproportionately unavailable to populations who are marginalized in other ways. Nor will marginal improvements in technology chase those inequalities away.

But intangibles matter, too. Scheduled calls can’t capture the serendipity of running into somebody you weren’t expecting to see today. The entire nighttime and weekend economy—restaurants, plays, DJ sets, musicians and sound and lighting techs, high art and low comedy, worship and debate and family—mocks any attempt to deliver its human complexity over fibre-optic cable. Political dissent requires crowds who feel safe being crowds, which is why there are already signs in a few countries that despots rather like a lockdown, because they can restrict freedom without fear of rebuttal.

It wasn’t wrong to hope for a virtual future we could carry around in our pockets and bend to our personal schedules. It was just shortsighted. Or incomplete. As late as February, we could FaceTime or just grab a coffee, stay in for Netflix or go out to right a wrong. Millions of jobs and a vast store of human richness depended on having all those options open to us. They still do. Still will, when the morning comes.