The future of machines with feelings

Experts say machines that monitor and respond to our emotions will soon be ubiquitous: What could go wrong? 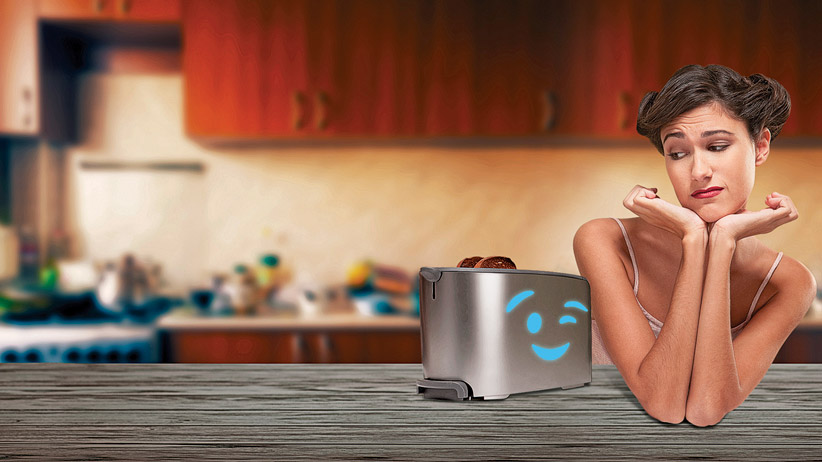 Is something missing from your relationship with your smartphone? Do you crave deeper intimacy with your cable box? Are you dreaming of the day you finally bond with your refrigerator?

Hope is on the way, weirdo. According to an article in The New Yorker, researchers are imbuing machines and devices with the capacity “to read our feelings and react in ways that have come to seem startlingly human.” Scientific consensus: we are only a few short years away from living in a world in which we can disappoint our dishwasher.

Some of these software programs instantly analyze our facial expressions. Others monitor our gestures or the inflection in our voices. For the most part, they can swiftly calculate when we’re happy, or sad, or confused. Some programs still struggle with the meaning of raised eyebrows—but they’ve got it narrowed down to “surprise” and “hilarious Nicole Kidman Botox impression.”

Experts believe that emotionally responsive devices will soon be “ubiquitous,” which is great news if you’ve always wanted a blender as your BFF. “Ten years down the line,” a researcher said, “we won’t remember what it was like when we couldn’t just frown at our device, and our device would say, ‘Oh, you didn’t like that, did you?’ ” Doesn’t that sound awesome helpful cool inevitable?

The pace of progress in this field will surely lead to tough questions, such as, “Will these devices infringe on privacy rights?” and “How can I stop my toaster from rolling its eyes at my bunny slippers?” And then there’s the biggest unknown: how will this invasive yet intriguing technology ultimately be used? Will it be harnessed for the betterment of society as a whole? Or for a second reason that isn’t as totally naive as that first one?

To find our way to an answer, let’s consider the work of Rana el Kaliouby, a brilliant scientist who is featured in the New Yorker article. Kaliouby wanted to develop technologies that could help autistic children better respond to the range of human emotions. She had noble goals and big dreams. Now, after many years, she has these technologies at her disposal—and so naturally she’s ditched the autism plan and is helping huge corporations test market their TV commercials.

Kaliouby is totally psyched about the potential of the “emotion economy”—so maybe we should be, too. Think of all that will change. Now when hackers swipe data from the cloud, they’ll get your credit card information, your buck-naked selfies and evidence that you cried at the ending of Transformers 2. And who among us doesn’t look forward to a day when corporations can quietly monitor the emotional state of their employees?

Smithers: Sir, our facial probes indicate happiness is down eight per cent this morning.

Burns: Release the YouTube video of that bulldog bouncing on a trampoline!

Or consider the humble cable box. In the U.S., the industry is reportedly working on models capable of scanning a room, identifying its occupants and tracking actions, such as eating, reading and, ahem, “cuddling.”

Meanwhile, Kaliouby’s start-up company is keen to partner with corporations to identify your emotional state and “monetize those moments,” which doesn’t sound creepy or gross at all.

Confused about what she has in mind? Kaliouby offers an example. When your phone senses you’re having a sad moment, maybe that would be a good time for Kleenex to send you a coupon? Wouldn’t that be super? And why stop there? Hello, we are a huge faceless corporation that totally cares your dog just died. Here’s a coupon for 20 cents off a new dog! All better now?